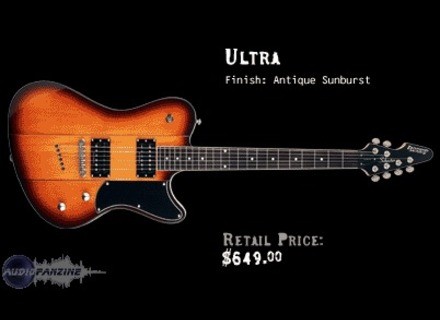 Schecter Ultra
5
The Schecter Ultra is the first model in a line of awesome electric guitars.  The guitar has 22 jumbo frets, along with two Seymour Duncan pick ups.  You've also got a single tone and volume knob, as long as a standard pick up selector switch.  I don't know where this guitar is made and I'm also not sure what the neck is made out of...

Overall, playing and using the Schecter Ultra has presented no problem for me at all.  I find it easy enough to switch between all different tones and playing it is even easier.  The neck has a great feel that makes it easy to play up and down the neck.  I found it especially impressive that I was able to reach all of the top frets without any problem whatsoever.  While the guitar is a bit heavier than most electric guitars, it isn't like it is hard to hold or anything like that.  Getting a nice sound is an easy task if you can play as getting a number of different sounds between the pick ups is easy...

The Schecter Ultra is an extremely versatile guitar, which is probably the best was to describe it.  While not as versatile as the Ultra II or III, I still find that I'm able to get all sorts of cool sounds from the original Ultra, as there is plenty to work with between the pick ups and setting controls.  I've used the guitar with a '76 Fender Twin Reverb which is my main amp, and a slew of effects, notably an Ibanez Tube Screamer for some overdrive.  I've found that the guitar is capable of getting both great lead and rhythm tones suitable for all sorts of genres.  Even though I play mostly rock and folk music, I can definitely see this guitar working for jazz as well.

The Schecter Ultra is no longer being made, but the guitars that Schecter has made after this one in the line of Ultra guitars are comparable as well.  However, if you're looking for the original Ultra, a good amount of them do show up on eBay if you're looking for one.  Beyond the make up and the great tone quality, it is also a beautiful guitar to look at, which definitely counts for something especially if you're playing live shows with it.  If you're in the market for a great electric guitar, definitely check out the Schecter Ultra and all of the guitars in the Ultra family.