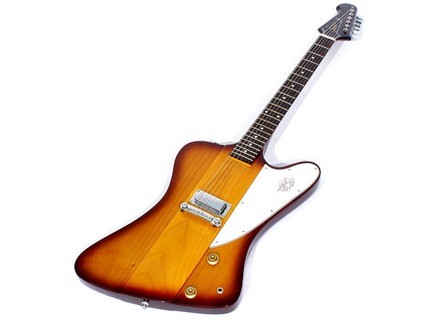 Tokai FB40
4
This is a replay of the Tokai Mythical Firebird I Reverse (yes that period Clapton Blind Faith) almost never reissued by Gibson except the dropper through the custom shop.

Obviously the differences with the illustrious ancestor but there are many legendary form, mini humbucker and wraparound.

The handle is stuck here like fire among studios Gibson and nonconductive, the body is alder, mahogany not (but we will see that this choice is not so stupid as that ...), and manufacturing is not Asian Kalamazoo.

The color is simply superb sunburst, adjusting frets are nickel, mechanical correctly reflect the agreement but seem a cheap manipulation, the price of a set of grover, I think the change rapidos.

. The rosewood handle is quite nice, although mine with dark fiber tight (but not the ebony anyway ... eh,-D)

The wiring is clean, fitting the parts without reproach.

The cache trussrod on the other hand is poorly trimmed on one side.

Remains the polyurethane varnish and not nitro (yeah, still need to dream .... Lol) that spoils the party a bit, but otherwise an overall very good for this price range.

Aesthetically, the result is splendid, there is a real Firebird hands, something that has to take Johnny Winter and Allen Collins. Rock&#39;n&#39;roll and sweet home Alabama people are away. ...

The guitar is impressive, not really for small jigs, reasonable weight of about 3.5 kg (yes, still ...), config ultra simple, microphone, volume, tone, and Sort this out for you as it sounds !

Come to the hairs in my set, thank you anglish!

The neck is quite nice despite the veneer poly (but I prefer the handle of my faded SG), broad at the base, flat, not a shred stick, but hey, Collins Freebird descended on without eyebrows, so ... ... ..

Access to acute rather good considering the shape of the guitar, well balanced in play standing despite the size of the machine. Seated on the other hand, better not be cramped in a room, it was soon to make excessive head banging. Is this funny feeling of having a plane in the hands ....

The mechanisms are impractical for which the fingers not especially big already, so for those who have bats in place of the hands, the tuning may be problematic.

Remains the position of the knobs not ideal and not very pleasant to handle. They are a bit "soft" when the turn and the jack a little gene the use of tone, finally, if you like me to play al&#39;ancienne on the Clean channel of a lamp by playing with the knobs to cruncher more or less .... so bent sheet almost obligatory, it&#39;s going for me is what I used.


Then vacuum it sounds a lot already. A lot of sustain, resonance ... a beautiful promise.

On the guitar has 2 volume, tone at 1, nice clean sound, not bad for blues picking, maybe not enough character for my taste, it is far from the Riviera mounted in 57 &#39;but .... More than nice anyway.

Tone was allowed a 1 and mounting the volume at mid race. ... Then it wakes up the guitar, a slight crunch that is heard, the sound is well rounded, but slightly Twangy, especially, not far from the single coil, but not the fat humbucker either. A kind of mix between the two ...

Going up the tone, that a little more crunch by becoming slightly acidic, very very nice ... it mounts the volume block, it screams dirty blues, come on, without exaggerating, it really looks like the sound of Johnny Winter Live and ... period. Crunch big fatty acid such as lemon and green in the tequila ... In power chord that shipments from wholesale, lead, solos come out very excited.

In short, if you know Johnny Winter, Lynyrd Skynyrd, you will feel welcome, this guitar really has the sound of Texas blues.

I play on my JTM 30 or more rarely a VOX pathfinder. The marshall, the sound is full, generous, perfect with the guitar, the vox, the recess transo any mini does not render too well the character of the beautiful, but even this type of amp (10 W transistor) the firebird sounds.

The output level of the mini humbucker is not exceptional but it is very honorable. Compare a mini humbucker gibs I do not know because never try to scratch with this microphone, but to give an idea of ​​the dynamic is the level of a P 90 (I say grain ... not dynamic). The bridge position and wraparound should not be a stranger to this analogy.

Besides, it&#39;s crazy as this guitar provides a sensation similar to a junior. Even nervousness, even investing in the mix, etc.. ...

Anyway, one thing is, I had in the idea of ​​a real Gibson upgraded quickly, but I will not just change its Mecas top (Grover Rotomatic or style banjo as true) and knobs but softies retained HB 1, I like what ... mic.

In a last thing, is it versatile? Definitely NOT! She sings the blues, just the blues ... plus some other thing of the soil. Basically its going niche of 60&#39;s garage rock&#39;n&#39;roll to hard the Free and Bad Co, beyond that is not really his thing.

But who cares, those who want more versatility will buy anyway a lag, or a Yamaha, not this UFO.
<div>
</div>

I love this guitar ... it was exactly what I expected of a firebird. Ok, this is not the original, but since the latter&#39;s output is very few copies in his time (63 - 65), I&#39;m not ready to have one! As for the reissue custom shop, saw the price of the latter, I can always dream ... it still must find a course. And 91 had not re wraparound memory but the system more classic tune O matic.

Asked if were to start again, I say, how board I have hesitated so long to buy it?

So wooden crate I do not know ... the only thing I know is that Sunbursts are alder, others Agathis (yeah, less sexy material).

For the price (350 €) it is straightforwardly a case, a look awful (well I think), character, sound particularly relevant, seamless gameplay, a class rather finish despite some minor concerns, short of all good!

To compare it with, go at random from an Epiphone Firebird, it has nothing to do, not finishing (the Epi are generally quite pleasant about it), but for the sound and character of the guitar much more enjoyable on the Tokai.