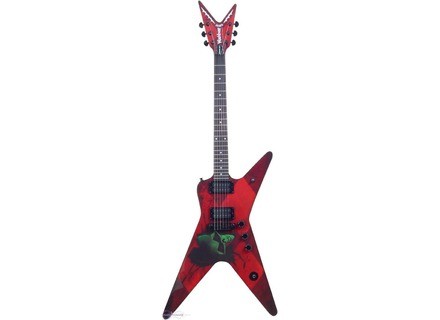 Nico7's review (This content has been automatically translated from French)

Trs enjoyable round for this price range (my surprise) that allow a game much easier, Access in acute is therefore with great ease!
The least of this guitar is its weight because it is quite heavy, so on stage you're tired faster.
But no problem, its design and beauty will motivate you to the end!

It is ideal for guitarists oriented rock or metal.
Exel in this guitar distortion! micro are of good quality or sound good!

I use it for 6 months and I must say that I was never the.
frankly for 460, we did a really good quality product trs So I remake that choice without line shells.

EXCELLENT quality price ratio!
and look DEADLY!
Did you find this review helpful?yesno
»

133 mhz's review (This content has been automatically translated from French)

Washburn DIME 36 G17
4
Hard-trail bridge, two humbuckers Wasburn, a selector and three positions for the knobs I'm not but I think c volume of pickups and tone. The wood I c not, handle 22 frets and pearl landmarks.

The handle is very nice, we slide very easily, it is perfectly clear until the 20th box is no problem for access to the treble. Ergonomics bah if you have never used this kind of scratch that was before my case is a p'tit time to adapt, we can play very well without any problem sitting and standing a must c! A little heavy and thick but well c bearable. We obtain the desired sound very quickly with an amp that follows. The only downside, when you play standing, attached to the strap at the front being incorrectly positioned, the guitar looks when you drop it true that c c boring but there are ways to counter the problem come home in the MOVE piercing a body blow to the neck junction, which was Sir Darrell Abbott I think. 9 for home incorrectly positioned.

It should tt has a style of my zik 'j'lai actually bought one a little moment of madness had the revelation when g Pantera and glue tt has done excellent in saturated and it is doing even better than I dared not hope to clean. I think qd even change the pickups in the near future (EMG 81/60 for example), those lacking basic potato. I plugged into my H & K and c matrix100 really Popcorn!

I use it now for about a month and a half and I am very happy. C a guitar quite affordable and tt was good for that price. I think it is mainly intended to play metal, hard rock and company but it is even versatile enough to tt, and changing the microphone I think c ideal. I would do with the experience certainly did!
Did you find this review helpful?yesno
»

AlfredW's review (This content has been automatically translated from French)

Washburn DIME 36 G17
4
MODEL I bought this in France, but I think I have in my hands last el 12 copies sold at Frans (at least if I was not lying)

Regarding the race, nothing to say, even if it is somewhat large, it is fast and trs we see progress soon appear this level, the same acute ct boxes; fingers glide up and down, left right, no hooks, no problem ... it's the same strong point that I found.

on the other hand in gnral, I must admit it is its weight, and I've often tried to play seated as to admit that the shoulder is quickly sought, the more likely they addressed ct on and it turns ncessaire stalling his right thigh between the points for the block (oh yeah is a technique

APRS a good grip it is easy to make good riffs.

A stamp his heavy, what is more normal for a DIME After all, and when achte A model like this is difficult to have other intentions.

Whether clean or overdrive, the two are really good and special, even with my little 15W amp Ibanez.

Personally I like both the lens and the fat, and it allows me to do both as I sing, a good versatility that level trs

As Premire guitar, and my humble level of budding guitarist, I must be pleased with this acquisition putt, especially since it is really particulire, and when we move c t can not be s'empcher the hug to start playing ... a rgal!
I doubt there are many guitars have such a good report qualitprix
Did you find this review helpful?yesno
»

NicoMetal85's review (This content has been automatically translated from French)

-Round pleasant, comfortable grip
-Easy access to acute incurred due to the shape flying mid, mid explore
-Ergonomics and look fabulous! green skull on a red background is the classroom, she leans against grave before! it will move the fastener strap!
-Very good sound! the original pickups sound super serious and I chage the treble against a sh-6 seymour duncan (microphones used by iron maiden, arch enemy, nile and Annihilator!)
-The fact that the guitar have a fairly large corp, sustain, and the big sound self-evident!
I put 8 because of the guitar that looks (we are obliged to remember)

She should be comfortable with my style of metal! with my metal band REDRUM http://www.myspace.com/redrumfr
- I play with a Mesa Boogie head and a single correct 50w Marshall 1960a cabinet with Eminence speakers modify vintage 30 (big sound guarantee)
We get a sound very bold or sharp as this coupled with the chard Mesa Boogie with microphone sh-6 that Pete!
It's Pantera is pretty easy to get with! alone or in rhythm is a feast
-Clear sound quite proper! blues solos and great with the original microphone!

I've since May 2007! purchase through an ad on this site! I do not regret a case! this model is found and collector!
I looked for a guitar without a floyd (because I have one) and a set neck!
-I 've try a lot of style but this one is pretty sound barrier look (everyone congratulate me) and his big sound! and imposing a guitar that requires!
"I do it again this election largely because it is very well finished (varnished handle, handle mid-highway, mid-paul)
Did you find this review helpful?yesno
»