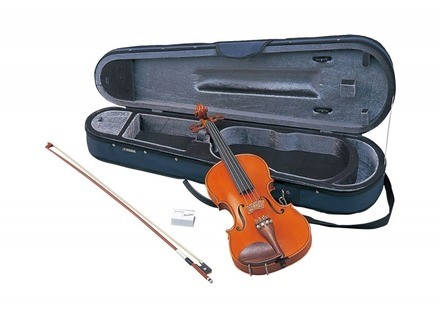 V5SA, Violin & Viola from Yamaha in the V series.

Yamaha V5SA
3
I recently started taking up violin and I needed a cheap one to start with. I thought this would be a good place to start as it was only around three hundred dollars. It is made of a fine wood and certainly looks much better than it's $300 price tage would suggest. However I found that it wasn't really all that it was cracked up to be.
I couldn't find one that didn't have a bridge that was too far from the neck. This made it difficult to play and made intonation sort of an issue as well. Granted, I'm a beginner, but I couldn't help notice that the violin was out of tune, and when I showed it to a friend who plays he said that it was because of the neck which made sense. I also noticed that it gets marked up really easily, especially on the fretboard. I don't know why that is but it certainly was frustrating considering that I don't finger as hard as I do on the guitar and I was still marking it up a whole lot.
I also decided that the strings weren't quite brilliant sounding enough, and I discovered that it was mainly because they used cheap strings. I don't know why they come with such bad strings but it was a real shame as that cut the quality of the violin drastically. After I tried changing the strings to some better ones, it helped, but not by much. The instrument simply didn't resonate fully enough for me, as it had a really weak sound in general.
Overall, I wasn't expecting much, but after playing the aforementioned friend's violin for a little bit and hearing the difference, I decided that I wasn't really into this violin very much. I think that Yamaha makes some great things but this sadly isn't one of them. You should just save up a little more and get a nicer one, it'll make you want to stick with the instrument more than this did for me.