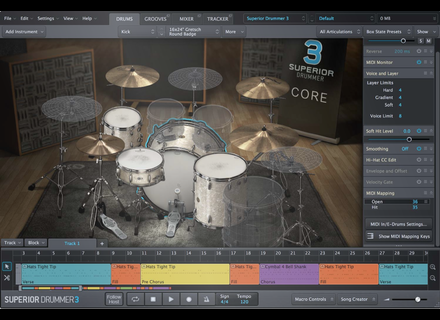 Toontrack Superior Drummer 3
4
Toontrack has hit a homerun and dusted off the old virtual drummer rules.
Using it is a real pleasure, and the time gain when setting up an excellent drumset well played with all sorts of playing details is just incredible.
Setting up a complex pied is a real child’s play thanks to the TAP2Find and drag’n’drop. And I play fusion jazz – ‘nuff said about how demanding I can be in terms of complexity. The first drums part for my first track made with it must have taken me two hours on an AABACABA pattern! In “Song” mode, the tracks allow for as many different versions as you want: copy, change the content for something else, tweak it as you like! And, it all takes less time than a global company needs to move its assets to a tax haven! However, in case you’d need to modify some patterns (which is my case for some particularly complex parts), SD3’s grid editor is less user-friendly than Cubase’s to my taste. But it may be a question of getting used to it…
Another interesting and really great feature is the possibility to load the drumset and effects separately when loading a preset. This allows you to choose the best drumset for a said song, then to load the effect set according to what the song requires.
In short, I was an Addictive Drums addict and I’m proude to have gotten over it!
The cherry on the cake is the excellent MIDI packs, the last I downloaded is the “shuffle” one inspired by Jeff Porcaro, Steve Gadd and others. Awesome!
A small regret : the presence of only four hihats

, however the four of them sound so good…


Addenda from April 2018 :
The more i use it, the more i’m amazed by yhis virtual drumset!
A tip regarding the Tap2Find feature: I used to enter the HH, SD and BD over the two bars, but since I play fusion jazz with complex rhythmic parts I had little results, so I was disappointed. But now, I’ve understood how to get the best out of it.
First: forget your ego and let go of that “ideal” rhythm you got in the spur of a revelation.
Second: take the general idea of the groove, e.g. the bass and bass drum are in sheer adequation, here goes the groove! So you just enter the BD and see what comes out of it. And, here comes the magic of SD3: provided you have enough and adequate MIDI files, you get a truckload of rhythm patterns that will make you realize how much progress you still have to make to reach the level of a rhythm genius.

The last piece I’ve produced using it is a four-part piece, featuring jazz, metal, jazz-rock and flamenco. Complex bars in 4/4, 7/4, 2/4 and so on! In approximately 8 hours, the drums were done!
The cherry on the cake, and maybe I’m going to shock mixing purists, I even used two drumsets on a same track: a jazzy SD3 one featuring a Yamaha set, and a friggin’ metal set right out from the Bob Rock Rock Foundry pack! The result just ROCKS HARD!!! Beware of memory issues though, and take care to avoid using two 3GB sets or you’ll see your 6GB of available memory disappear in a wink, hence limiting your use of plugins while mixing.
Did you find this review helpful?yesno
»

Listen to the 25 audio files about Toontrack Superior Drummer 3 »