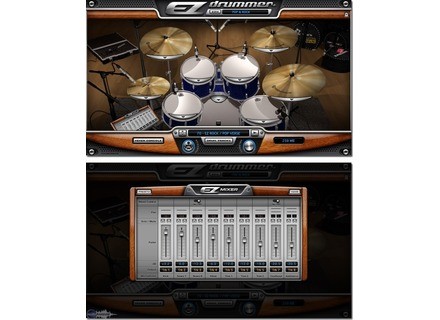 EZdrummer, Virtual Drum/Percussion from Toontrack in the EZ Drummer series.

Product replaced by the Toontrack EZdrummer 2.

Toontrack EZdrummer
This drum pack works on MAC , Windows Xp and 7. No issued found while using it on different platforms like Xp , 7 and Vista.

The manual provided by Toontrack shares a lot of important information regarding the program and its features and effects in a very effective manner that allow the user to get right to work.

The general configuration is quite easy but it requires some time doe to the high size of the product that is sample based.

The software works good in its configuration , the level of stability isn't a problem.

I'm getting great performances in creating different grooves , beats and syncopations in my songs using this product.

I've been using it for about two years now.

What I really love about this product is the multiple microphone control which gives a better and more advanced perception in space for the listener , the stereo and multi-track routing is also a huge helper.

The fact that this library is based around real samples recorded in New York makes a huge difference due to its quality and real sounding drums.

You can also add your own midi files to the software or use some of the midi files provided with the product.

The humanizer function allows the user to create higher quality drum patterns that only a real drummer could.

My opinion about the value for the price is great , a very advanced drum tool that incorporates a very cool sound with different time features.

Precision and quality of the sound is extremely great , very good sounding kicks , snares and toms , love them.

Knowing what I know , I would buy this product if I'll need a drum pack.
Did you find this review helpful?yesno
»

Toontrack EZdrummer
4
EZ Drummer is a sample-playback engine for drums. It can be used as a plug-in inside a DAW, or as a stand-alone application. Toontrack offers a ton of expansion packs that run inside EZ Drummer (or Superior Drummer 2.0), if you want different sounds. There are some pretty good deals offered throughout the year, so I definitely suggest watching the price for a bit if you are looking to purchase it.

Toontrack's installation process is straight-forward (no iLok). Everything about this product really is 'EZ'.

Once installed, the drum samples can be triggered from e-drums, a midi keyboard, or even from the internal midi library of midi drum performances. I think the midi files included in toontrack's products are the easiest to use compared to other products (BFD2, Addictive Drums, NI Studio Drummer, SSD4, etc.). The midi files can be easily dragged into the host DAW for sequencing.

The samples that come with the base EZ Drummer package are pretty stale in my opinion. The expansion packs have much more usable sounds, and I would recommend looking into the many options to find the pack that fits the style of music you are interested in.

There is one specific (but not completely intuitive) reason I would recommend EZ Drummer. Although the samples included in EZ Drummer aren't great for a final song mix, it is a perfect software package to use during tracking if you are using e-drums or a keyboard to record a drum performance. EZ Drummer is super light on the CPU, which means you can run it at low latency without problems. I always use EZD to track drums because I can use a 32 sample buffer setting to achieve almost no delay while recording. Other software that is heavy on the CPU cannot be run at such a lower buffer setting. That software can just be substituted during mixing when the latency of higher buffer settings (1024 samples) isn't an issue.

If you don't have access to really nice drums, a nice drum room, nice studio equipment, and a drummer that never makes a mistake, drum samplers are the way to go for recording. There are a lot better sounding drum libraries worth considering if you want to achieve 'semi-professional' sounding drums on your tracks. Toontrack offers some great expansion packs that need to run inside of EZ Drummer, so that is one reason to buy it. It is also a great tool by itself to use during tracking for low latency.
Did you find this review helpful?yesno
»

Toontrack EZdrummer
4
I have used a bunch of different plug –ins for real natural authentic drums and there are a few of them that stick out to me. ToonTrack EZdrummer is one of them that will always be a part of my set up. The best part about it outside of the drum sounds is that it only cost 80 dollars. Or you can purchase the download only version that cost a little more than the boxed version. The Toontrack EZdrummer comes with over 8 thousand MIDI files. It has an internal mixer and you can edit each individual drum patch right in the program if you choose, that means you will not have to do any external EQ or effects when using the ToonTrack EZdrummer because you can do it all right in this plug-in. I have used the Toontrack EZdrummer in Cubase and FL Studio and it has worked flawlessly in both of those programs.

Setting it up was easy, it does take a while to install and load all of those sounds and patches but it is well worth the wait. The interface of the Toontrack EZdrummer is easy to work with, changing and editing drums are simple. You can also use this multiple times without slowing down your system. I have songs that I have done that have up to 7 different channels of Toontrack EZdrummer going at the same time and it has never stopped working on me.

If you are in need of a live drumming application VST, then look no further. The Toontrack EZdrummer is simple to use and it has professional real sounding drums that were recorded and sampled in a real studio. Forgot about all of the other programs and plug-ins that claim that they have the best sounding drum VST, because they don’t! The Toontrack EZdrummer has all of them beaten, and they also beat the competitors’ price as well. You cannot go wrong with this VST.
Did you find this review helpful?yesno
»

Toontrack EZdrummer
3
The Toontrack DFH EZ Drummer is a drum sampler with several type of samples.
There weren't any kind of compatibility issues, it works great on Windows XP, Windows 7, Vista, or MAC OS X.

The software work correctly in this configuration
THe gear is pretty stable, I haven't found any problems regarding the program.
I've been using this now, for about a month.

Another great aspect of this product it's that it's very well designed and compact so it saves the music producers a lot of time in their process. However this product has a couple of issues, one of it, is the sound and the limited amount of effects available for sculpting the sounds and the eq provided by the program.

I like the humanize feature that allows to get away from the robotic feel of a certain pattern, the swing options works also as a great advantage.

However the quality of the sounds can't match Addictive Drums or BFD that's why I would suggest getting those products if you own the money for them.

However analyzing the balance between price and quality, the price is amazingly great for all those features and midi packages included in it.

I've tried several models and this one works great if you don't have or don't want to spend much money and still get some variety, but you should consider some higher quality drum samples if you're really serious about it and want to get a more deeper sound, but if you know how to make some good sounding parallel compression you can get away with it.

Did you find this review helpful?yesno
»
Read the 63 user reviews on the Toontrack EZdrummer »

Published on 08/06/13
Toontrack updated four of its softwares in order to add the 64-bit AAX format for Pro Tools 11.

See all 36 photos of Toontrack EZdrummer »

View all 14 videos of Toontrack EZdrummer »