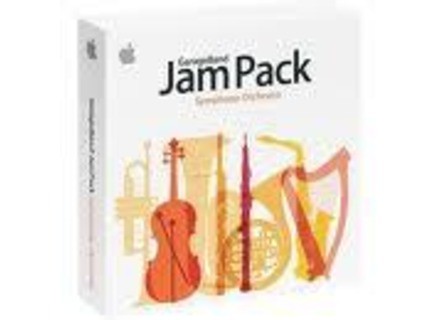 Apple GarageBand Jam Pack : Symphony Orchestra
3
Well first and formost I want to say that using Garage Band will only get you so far, Garage Band is Apples bottom line software and comes installed on most of the machines for free. So before investing into any of the Jam Packs that Apple puts out you should invest into get another sequencing program. Something you can further your ability with and get more in depth with music and really start to understand how digital music works. Garage Band wont allow you to do that, I say go with Logic. With that being said, if you still want to use Garage Band and want to get the Jam Pack, you would need to understand that you arent getting vst instruments. Jam pack will only give you loops, now you will get a lot of them, actually I think there are over 1,000 of them total which is a great value for the product. But paying 99 bucks for a bunch of loops when you could spend a little more and get a way better program to create music in will be your best bet.

I say hold on on purchasing Jam Pack and purchase logic. Get away from using Garage Band unless you want to be a beginner for ever. I have never purhase Jam Pack and never will, but a friend of mine has and told him the same thing im saying in this review. Its not worth spending that money on a pack of loops. You need good quality vst. If you are going to invest, get a good sequencer and start from there.

Jam Pack will work great with your Garage band but only because there can be no issues, they are only loops. Apple has just paid a bunch of musicians to record a bunch of loops and then they put them on a disk and sell them to you for 100 dollars. Do not buy this. It is not worth the money , spend your money where it will matter.

The Symphony Orchestra contains various different loops of all kinds of different instruments you’d expect to find in a standard orchestra. This includes pianos, trumpets, tubas, harps, violins and all kinds of other things. Keep in mind that these are simply loops and not actual VSTs. Because of that, their usage is fairly limited. What’s even more limiting is the fact that you’re using GarageBand. GarageBand is not one of my favorite DAWs out there. It works for jotting down some ideas, but it’s very limited as to what it can do. It’s a pure beginner’s DAW, and I don’t really understand Apple’s point in marketing something like this for the beginner out there. Sure, you can drag and drop some loops into the audio pane, but that’s about the extent of what you can do with GarageBand alone.

As with all Apple products, they're rock solid. I haven't experienced a single crash with Waveburner, and that's part of the magic of OS X. You're dealing with one of the best and most stable OSes out there. Everything is optimized for your hardware (assuming you're not using some sort of Hackintosh), and everything meshes like it should. The program doesn't use up too much memory, but it is a pro app, so it'll use more memory than certain other apps out there.

If you’re looking for some symphony loops out there, there are better choices. There are also more cross platform compatible choices. If you’re a die hard GarageBand user, this might be worth looking into, but aside from that, I find it’s much easer to just create what you’re looking for in a Logic VST.

walsch-it's review (This content has been automatically translated from French)

Apple GarageBand Jam Pack : Symphony Orchestra
4
A symphony orchestra on your Mac: film music, orchestration, hip-hop if you like, everything is possible with JamPack.
own sounds impeccable, dynamic, very transparent.
quality / price? ben a symphony orchestra for 50 euros ..
Did you find this review helpful?yesno
»

jules_th's review (This content has been automatically translated from French)

Apple GarageBand Jam Pack : Symphony Orchestra
2
Reu there are 2 or 3 weeks, well, I'll be polite, I thought navement receive what to do with the composition for orchestral instruments, for example, that's all bte, a violin or a cello or double bass, not the moon, eh, well no, nothing, sheets of violins and other instruments but not least one string. A peak. So yes, legato, pizza, a clarinet or oboe not catastrophic, like a bassoon same, but honestly forget the strings (solo, I insist, "band" is whatever you want) what a mistake ...
otherwise, the loops, oh well, loops 'classic', has qlq'un INTERESTED? of phrases?
In short, a lot of wind ... report quality price, forget it.

Did you find this review helpful?yesno
»
Read the 5 user reviews on the Apple GarageBand Jam Pack : Symphony Orchestra »