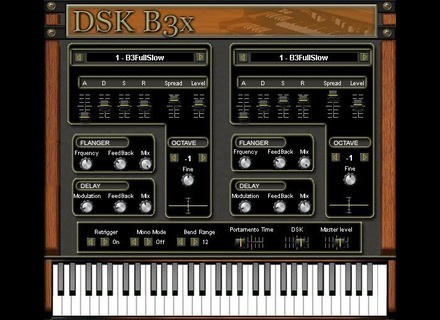 DSK Music B3x [Freeware]
4
The DSK B3x is a freeware plug in that has 2 layers and 12 different waveforms. The effects aren't too much, it only has Delay and Flanger. DSK has come out with a ton of VST that have all been free and all of them have been pretty good and worth the download. Installing the B3x is very quick, it only takes a few seconds to download and install it. It is also very stable and can even run great on slow machines. I have ran the B3x on my Intel Core i7 3770 processor and it worked fine as well as on a old Toshiba laptop that I was using for a mobile set up.

The best part about the DSK B3x is that it is free and you have nothing to lose if you download it. It only takes a few seconds to install in your VST folder then you are ready to load it up and start using it. As far as the sound quality, it is decent. But nothing to brag about, you really can not expect much more from a free VST. It will serve its purpose , but if you are looking for high quality organ patches you might want to look else where. The DSK B3x seems to come up short in to me when it comes to the quality of the sounds, there is a huge difference between a freeware organ and a paid high quality organ. But if you can afford a good organ Vst then DSK will still work for you temporarily.