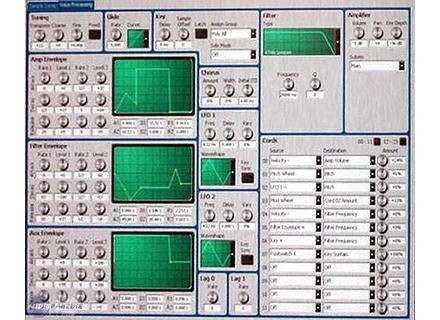 Creative Lab shareholder of E-MU Ensoniq is to increase the capital of the Trust accrotre dveloppement the product on a march up: The computer music. And as we know, when it is philosophically east to the hardware, it is hard to pass trs soft. However, it is never too late, so E-MU adcid guide the dveloppement of its products to the software taking into account that the soft start hard-Submitted some gaps so the intrt would produce a compromise between the Hard and Soft. So I give you a thousand: The SOFT EMULATOR

The concept is difiant is a blow to Russianness if it works. I mean if it works because every time that E-MU wanted s'intresser of prs and far computer technology has resulted is a total fiasco (Paris, Pro, APS, Paris V3) - Yes, Windows amricains dveloppeur still have great difficulty in producing timely drivers adapted to machines commercialiss ..... laugh out loud ..... :-(
Revennons our sheep, the Emulator Soft has done but the fact Graaaaave!

Marketed with the new edition of Soft EOS LINK 2 which has nothing do with that bastard version Premire n'tait a large screen visualization of what is happening on the the notch sampler, the Emulator Soft is actually a form dvelopp E4XT ULTRA PCI card (for PC - then the j'allucine :-( -) edition which will dpendre The EOS LINK 2 and is recognized by all software squence midi and audio as a VST INSTRUMENT (then j'allucine - also

-). The PCI possde:
Input / Output AES-EBU & S / PDIF
Audio input, Audio output, two slots on the physical map to the SDRAM (why not since the DDRAM SDRAM will be ending for ...) to be independent of the compltement Internal Services the Computer. So no latency ... it was on paper.
It should normally be a slot for receiving prvu also RFX32 unless one sees this apparatre nice option if PCI is also (log option on the E-Card) ... ... .... In terms of Soft itself, I have a picture taken from the home for the 2002 NAMM 30me anniversary of E-MU worth its weight in gold.

It's an Emulator 4 Ultra XT therefore, no worries.
That dynamic is raliste, is monstrous! (In a good way of course)