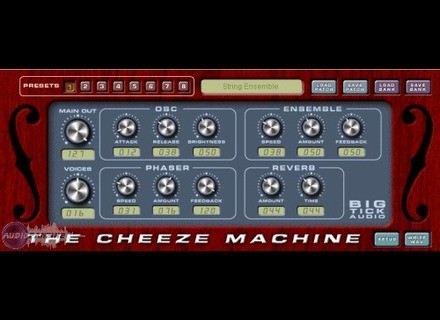 Big Tick Audio Software Cheeze Machine [Freeware]
The Big Tick Audio Machine is a software that I was curious about, that is why I downloaded it. Mainly because it was free and I like to have all of the sounds that I can have even if some of them are subpar. Its always good to download free synths like this because there maybe a preset that you will love and use it in a lot of your own work. Its like fishing, sometimes you will get a good catch but most of the time you don’t get anything good.

The Big Tick Audio Machine is very easy to understand, I don’t even think they make a manual for it (atleast I never saw one). I basically just used this free software for about 3 months, but I still have it just don’t pull it out much. I runs good and installs really easy. You really couldn’t ask for an easier installation on a windows computer.

Overall, it is free! What do you have to lose, I think it’s a decent software and its very light and doesn’t take a lot of your cpu so you can run several instances of it at the same time with different sounds and it would cause any problems. Its worth the download. You will like the Big tick Audio Machine if you are into simple plug in synths. It also has a few small effects, I think some phaser and Chorus effects if I remember correctly. I didn’t use them though I just use the ones in my mixer tracks because they are much better. But what more could you ask for , it’s a free software synth that will give your system no problems. If you don’t like it you can just delete it and never use it again. Use free synths more often and you will find some that sound really good. But I wouldn’t purchase this software if it was for sale though.

Big Tick Audio Software Cheeze Machine [Freeware]
4
Big Tick Audio Software's Cheeze Machine is a free piece of software synthesizer that aims to emulate cheesy string sounds. I'm no longer running this software in my current set up, as my current system isn't compatible. It was, and most likely still is available as a VST plug-in for both Mac and PC systems. I don't remember too much about the installation process since it's been a while, but I would most likely remember if I had any problems. The interface of the soft synth is easy enough to follow, with sections for an oscillator, ensemble (which is basically chorus), a phaser, and some reverb. Each section has it's own parameters that I found for the most part to be pretty self explanatory. There are also preset sounds which make for great starting points if not adequate sounds on their own. A manual probably wasn't made for this.

While I was running the Big Tick Audio Cheeze Machine plug-in, it was in Cubase SX and on a Hewlett Packard Pavilion dv8000 lap top. The computer consisted of a 3.0 Ghz processor and 2 GB of RAM. I don't ever remember having any problems running the software, as I would only have one of them open at a time anyway. It's definitely not going to take up very much processing power...

For a free soft synth, the Big Tick Audio Software Cheeze Machine is a nice little synth to have around. While it's got a very specific sound and isn't going to be suitable for use very often, the sounds that it does have are pretty cool for what they are. I'm a fan of more lo-fi sounds myself, so I definitely enjoyed having it when I did. If you've got a compatible system and are interested in soft synths at all (and free one at that!), do yourself a small favor and give the Cheeze Machine a try as it definitely won't disappoint when it comes to cheesiness!
Did you find this review helpful?yesno
»

mindfenris's review (This content has been automatically translated from French)

Big Tick Audio Software Cheeze Machine [Freeware]
5
Installation is a pleasure, the file only taking up very little space ...
no manual, but given the limited number of adjustable, is it really necessary?
a PC with a small configuration (that the matter under Windows OS) will do

I use this plugin with FL Studio, I m using it to make tablecloths type 70's creamy EVE apart, I can not find better
No cheese machine is not too CPU-intensive so very very very convenient for ptites configs

It's been a few years now he drags in my VST folder
+ what I love: the sound, and phaser strings
what I like -: there is no

is a freeware that is worth 5 minutes linger sy
Did you find this review helpful?yesno
»