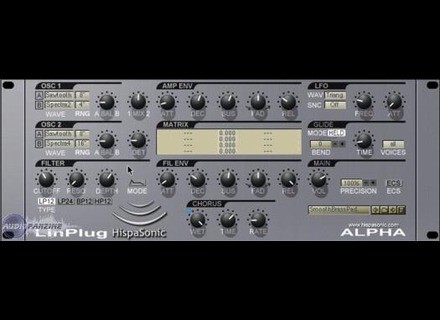 Shake's review (This content has been automatically translated from French)

LinPlug HispaSonic Alpha [Freeware]
5
That is, a VST is a VST, there's nothing more foolish to install
NB: works perfectly with the Cakewalk wrapper for DirectX

Stable.
Very glop, we will talk about her here: this is phatt. Maite's recipe: you would paste a Simulanalog (freeware ditto) JCM buttocks, you mount the volume, and bang you're playing on a Minimoog, it décoiffe

Used since ... its release (freeware addicted) to replace the synths since I left EMagic Logic Audio.
Especially of ground and sweeps, this synth is varied and effective, but it is a matter of taste (compared eg. The V-Station, it is much warmer and more versatile, but you lose the arpeggiator and other ptites cool features)

Come on, it's free, and y 'will for everyone!
Did you find this review helpful?yesno
»