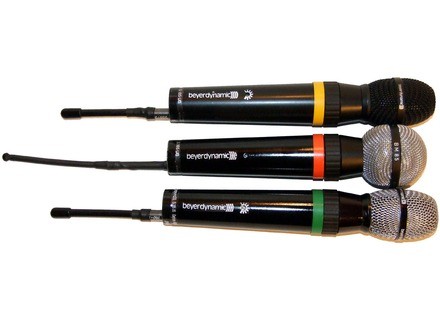 S 185 US, Wireless Microphone from Beyerdynamic.

Beyerdynamic S 185 US
5
The S185 is firstly a VHF (200 MHz) has interchangeable heads. It was a great competitor Sennheiser SKM 4031. It has been on the cross several TV studio (Drucker Taratata ...) with its head EM 186, EM see his head band 85.
I use it for many years in conjunction with good old SKM 4031. I also had HF SM58 whose sound had nothing to do with them. I dropped.

My limited budget led me first to brand "cheap" without success. Then I got the idea of ​​the opportunity ... with happiness.

They are extremely reliable microphones do not lose anything over time (unlike the SKM 4031) and most importantly, do not suffer from noise problems modulation of SKM (especially older).

I use them in concert, the singers are often surprised at the tone of voice, details with the head band BM 85, but regretted the weight. EM 186 head is much lighter and would be almost better than the electrostatic cell SKM 4031 ...

The receivers are a little "cheap", but are also very efficient. We regret that the two antenna are taken so close, hard for diversity.

Frankly, if you have a small budget, why not more, just ask!
I myself still searching ...

AND I want to discover the electrostatic head, rare, DM 186 used by Phil Collins when he was in agreement with Beyer ...

Note there are two model transmitter. The old antenna long as the S 85 37-MHz (do not be afraid) and most recent short antenna.