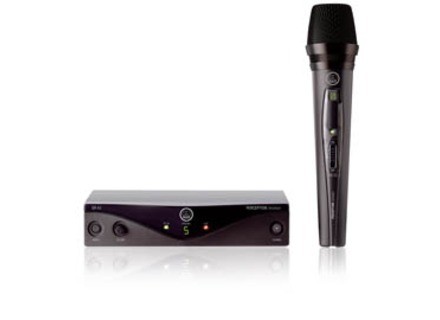 AKG WMS 45 Vocal Set
3
First impressions after 1 hour of use at a conference.
Two AKG Perception intended to replace two Shure SM58 VHF.
Their role is to enable people in the audience to give a comment from their seats.
(Detail that is important in the remarks that follow)
SR45 receiver with handheld microphone HT45
8 frequencies to choose from.
Autonomy announced: 30 hours ... To see! ...

Like:
- Side sound, found the sharpness characteristic of AKG. After, tastes and colors ...
- A single 1.5 volt battery in the transmitter RF
- Nice design

Like least:
- Noise handling of the micro when it passes from hand to hand or if the person speaking moves even if only one of the fingers holding it.

At first sight, the sound of this micro color should highlight women's voices, but ... to verify.

After these initial impressions, good value for money if we stick to the sound quality.
But I would advise against this model to anyone who would use the handheld microphone under the conditions described above, or if the singer to the microphone which is designed on the move.

Personally, if I read a review like the one I just wrote, I bought another model because handling noise affect the quality of reception and that where these microphones are used, the noise bothers some audience.