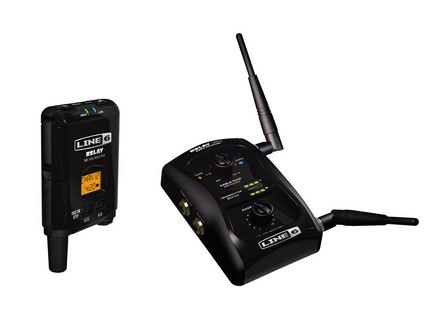 Relay G50, Wireless system from Line 6 in the Relay series.

Line 6 Relay G50
4
This came highly recommended from other musicians on forums such as Rig-Talk and other places. Had it special ordered from my Guitar Center as they only carried the G30 which others had said was built a little cheaper. I was very happy when I plugged it in for the first time and it was super easy to use. The basic controls were simple and very intuative. Absolutely love the Cable Tone feature to simulate the impedence of the guitar chord and adjust the tonal characteristics of the input signal. It truly works and does a great job. I have found very little degrading of the tone going wireless as oppossed to plugging in although there is a slight difference but very minimal. I was very happy and still am happy with the overall sound and function. Here is where it gets complicated. Second gig using this, the chord pulled out of the transmitter and now does not snap in, I have had to tape it so it never pulls out. This really bugs me because for the price, it should be able to take a little beating here and there. My assumption is that mainly working musicians need a wireless so it should be tough enough to handle the wear and tear of the road. I also don't like how easy the battery panel opens on the transmitter, way too easy to pop off. This review is a mixed bag not because of the sound but because of the construction. On the surface, the thing appears to be heavy and built well. I found out that it has some weaknesses and unfortunately it would cause me to look elsewhere in the future for someting a bit tougher as far as the transmitter goes. I wish it was better as I like its functionality.

Line 6 Relay G50
5
Line 6 has always been known for their modelers such as the POD. However, they bought out a company that has been making some of the best wireless devices in years called Xwire. Way back in the day, Xwire was one of the most famous wireless product companies because their stuff sounded closest to a cable. They went bust for a bit, but then they were revived for a few years and started making a new revision. Line 6 then bought this company, and that’s the current product you see today.

The Line 6 G50 is the “midgrade” wireless that they offer. They have the G30, the G50 and the G90. The G30 and the G50 are the closest, and they’re meant to mount to pedalboards thanks to their smaller footprint. The G90, however, is a rackmount device. For the best bang for your buck, I honestly feel that the G50 is the one to get. The G30 is a bit more slimmed down, where as the G50 is closer to the rack unit. In fact, the main difference between the G50 and G90, besides the fact that the G90 is a rackmount unit, is that the G50 has a range of 200 feet instead of 300 feet. Aside from that, it has the same bodypack, the same dB, the same frequency range, etc. Granted, the G90 has a few extra little things in there for rack guys, but they’re not needed for 90% of the people out there.

If you’re looking for a wireless that’s as close to a cable as you can get, I highly recommend the G50. It’s economically feasible, it can mount basically anywhere, it uses AA batteries in the receiver instead of 9V batteries, and it can even be powered by a regular daisy chain connection or something like the Voodoo Lab Pedal Power Plus.

Reiep's review (This content has been automatically translated from French)" It works, and well"

Line 6 Relay G50
4
I use this wireless system for a few weeks now. This is my first and only I have tested so far is honestly a comparison difficult.

I used it in relatively small parts, at a maximum distance of 7-8 meters without encountering any problems. The level I was very surprised not to hear a difference with the right cable (Vovox Sonorus) in a context again. Studio surely there must be something, but we rarely use wireless.

The construction is very good, any metal.

Only regret: the issuer would benefit from a more efficient way (like standby if no signal for X minutes) energy saving, heads up as I go to eat batteries leaving the transmitter turned on after playing ...

Line 6 Relay G50
4
Practice for its size and 9V "pedalboard friendly"
The transmitter is very robust and ergonomic
Latency is hardly noticeable
I really like the "cable tone" that keeps its settings we play wireless.
Compared with UHF systems, it is less sensitive to environment "disturbed". But be careful anyway, in these places, the range is much smaller.

Did you find this review helpful?yesno
»
Read the 6 user reviews on the Line 6 Relay G50 »