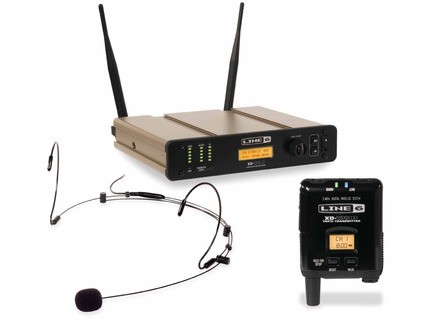 XD-V70HS, Wireless system from Line 6 in the Vocal Wireless series.

Line 6 XD-V70HS
4
The Line 6 mic element sounds great. I have previously used condensers and dynamics in my mics for various reasons, and their capsule sounds as good, and in my opinion better than any Shure…but if you are still a slave to those mics ( many Front of house and monitor rigs are dialed in for those mics), you can replace the element with any Shure wireless capsule ( Audix is available with an adapter from Ratt Sound as well, and you can also use Heil capsules). They also have their great modeling to emulate the EQ coloration of some very popular mics…I chose to just use their element without modeling as I thought it sounded best with my voice, I even AB’d it against a Shure 58 and a Beta 58 capsule I had from my other handheld wireless units I still have, and still preferred theirs.

The wireless part of the system is great, no pops clicks or dropouts, seems easy to set up as well, I was a little disappointed with the sound of the Mic itself, from other reviews I had read it was nothing short of amazing, they compared it to handheld Condenser Quality.
I have to say although it isn't bad, I am used to my Audix OM7 mics with snap-on wireless transmitters. The OM7 is heads above this mic for clarity and the way it picks up every detail in your voice. I will have to try an OM7 Capsule on this mic, they are suppose to have an adapter for it, we'll see.
On the upside it picks up spoken voice really well, so when I used it at a few Weddings we did, it was easier for those who don't have good mic techniques to use, even when they held the mic down by their Belly Button we could make out what they were saying.

Published on 01/14/11
Line 6 announced the expansion of its XD-V line of digital wireless microphone systems to include XD-V70HS and XD-V30HS, a pair of headset microphones with beltpack transmitters.