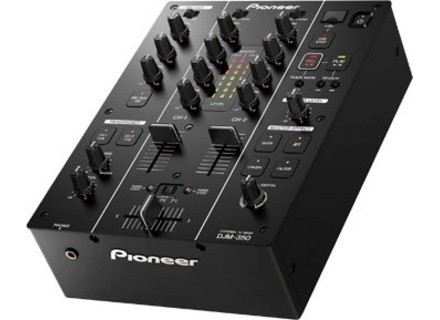 DJM-350, 2-Channel Mixer from Pioneer in the DJM series.

Pioneer DJM-350
5
The Pioneer DJM-350 is Pioneer's entry level two-channel mixer. Pioneer has been known as the standard when it comes to professional club DJ setups and this unit keeps to that. For being an entry level product however, this feels pretty professional. While it lacks in some features of larger, more expensive units (like effects) this is of the highest quality in builds and parts. Everything feels very smooth and is accessible, and easy to locate even in darker lighting. Also, it has the option of being able to plug in a USB memory stick and record and then review and distribute your own mixes! This is a very sought after feature for beginners, as it can help you improve drastically.

I had no hitches setting up the unit, it was just like it is for every other mixer on the market. Everything on the DJM-350 is laid out well and easy to access, and functional as well. Things are labeled clearly and there is space for your fingers in between all the knobs and sliders. I've had no problems with faulty parts, sticky knobs or crackly pots and sliders.

The Pioneer DJM-350 is a 2 channel mixer that supports two RCA CD / Line, two RCA phono line, one microphone and one RCA auxiliary input. It also features output terminals such as one RCA master out, one headphone monitor out, one RCA Rec out, two 3.5 mm mini-jack and one USB A port. The mixer doesn't color the sound in any way other than the EQ, which is pretty good. Everything sounds good. The EQ is 3 bands with cut switches. There are 4 effects that are nothing special, Filter, Crush, Jet and Gate. The Gate is not a true gator, but everything is functional.

Overall this is a great unit, very professional for the price, and great for intermediate DJ's and DJ's who are just starting to perform. It has a nice feel and sound overall. It's very reliable and worth the money. Great gift for an aspiring DJ. I use this in my practice space, and at smaller or really crazy gigs.
Did you find this review helpful?yesno
»

franck60300's review (This content has been automatically translated from French)" Effective"

Pioneer DJM-350
4
- The table has 2 / line inputs and 2 CD phono inputs. The choice is made on 2 votes.
- There is a switchable path between auxiliary and microphone.
- At the outputs, 2 pairs of RCA. No XLR output or output cabin.
- 4 effects are available, applicable only on the master unlike its big sister the DJM400. There are very effective. You can apply the effects of the DJM 350W downloading the firmwire

- Big advantage of this table, you can record your mix directly on usb key with the support of a single button. then replay afterwards. Then the file is accessible computer in wav format. ideal for you or train if you have a podcast

The general configuration is super simple. Everything is easily accessible.

The manual describes the functions.

The sound level there any breath.

the Equalization you can go up - infinite on acute low medium. Equalization is fine and progressive. the pots are fun to use.

The effects are numerous but can really work

I use since August 2010. at first I used it exclusively at home and then I started to make the mobile disco. Thing in which I found its limitations since it does not have XLR output or output cabin.


What I like the most
- Pleasant to use faders and knob and precision equalization
- Recording on USB key in a snap, which is really great.
- Beautiful table and beautiful design

least:
- No XLR output.
- No channel selection for the effect box

before I used a 700 DJX home Berhinger and it really has nothing to do.

I plan to change the model because it is not suitable for my use mobile disco.
Did you find this review helpful?yesno
»

The general configuration is it simple?
Very simple

The manual is clear and sufficient?
For someone novice, yes.

The usual functions are they easily accessible?
All functions fall under the hands.
It is an intuitive table.

The console is transparent?
Yes, the sounds are played correctly
No low or too high frequencies present

The equalizer is effective?
Yes, once the knobs screwed up, no sound will come out

Introduced she breath?
Neither

How long have you use it?
Nearly one and a half

What is the particular feature you like best and least?
The function which I think is a real plus is recording. Wav on USB key.

What I like least is the only Master in RCA output. I preferred XLR.
But this is a detail for a two-way table that has a box Indeed, for every cue and recorder on USB key.

How would you rate the quality / price?
With all these features, I find rather good value.
Especially as now used, one can find around 300 euros.

With experience, you do again this choice?
For the home DJ without hesitation.
This is more than enough for the drive in either.
In addition we are not lost when moving the table to a table in the above range (DJM 850 or DJM 900).
Did you find this review helpful?yesno
»

Naoshige's review (This content has been automatically translated from French)" The top? Maybe yes"

Pioneer DJM-350
5
All are useful information on the Pioneer site.

-) The general configuration is simple?

Yes, very. It takes a few minutes to tame it.

To be honest, I have not even set foot inside.

-) The usual functions are they easily accessible?

Yes, very accessible, despite the size of the table.

-) The console is transparent?

Oh yes. Possibility of the killer through his three pots to zero, just to see one of the three. Low for example, are silent once Knob set far left, which is top for my use.

Not that I know, but I use a relatively low power amp sound, so to do with the big stuff behind. But it is the same as "mechanical" than the DJM upscale, I think it's any good on this point.

-) For how long have you been using it?

-) Did you try many other models before getting this one?

I was mixing for a long time on a BST Digital 194 DSP, I could feel as the Denon (I do not remember most of the reference).

+ Ultra easy to use
+ The registration via USB
+ Using effects
+ The robustness of the faders and pots
+ The big sound!
- What two things interesting (I love that the gate is replaced by the Echo)
- These same effects assignable only on the Master

-) What is your opinion about the value for the price?

Moved to 495 € Thomann, the price is perhaps a tad high compared to a Xone 22, for example, but the fact is that recording via USB is a feature that may prove decisive in the final choice.

-) Knowing what you know now, would you make the same choice?

Definitely yes. Despite his prize is a beautiful table that is all we ask him to perfection.

Finally, I think many who seek a two-way table rather move to something cheaper, but the fact is she really a lot of advantages, starting with the recording via USB. Yes I know, I stress a lot on this feature, but for those who run a podcast or who love sharing their mix is clearly a must have! No more haphazard wiring for poor miking, there is live and in high quality WAV. When the effect is, according to Pioneer, who are the most used club that are condensed on the table. Ok for the Crush or Filter, but the gate and the Jet I doubt it. I really like the Echo in place of one of the last two. But that said, it's not a big handicap, and even though they may number, they are simple to use and give quick punch in a set of electro.
Did you find this review helpful?yesno
»

Published on 03/23/10
The Pioneer DJM-350 DJ Mixers has 2 channels, with features that can also be found on Pioneer Club Standard products like the 4 Effects, Looping and Rekordbox compatibility.