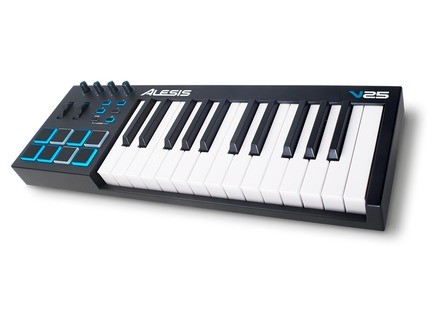 Each of the Alesis V and VI Series features three 25, 49 and 61 full size keyboards, include performance pads and ship with a software utility for parameters and presets setup.

The VI Series is more performance-oriented and include semi-weighted keys with aftertouch. Alesis increased the number of multicolor backlit pads to 16 on these models, and you’ll find on the VI25 32 assignable commands, 48 on the VI49 and 64 on the VI61. You’ll also find pitch bend and modulation wheels, as well as transport and Present Up/Down buttons, a clock, a sustain pedal input, a MIDI out and you can power the keyboards with an external supply.

US pricing for these new Alesis series are as follows: