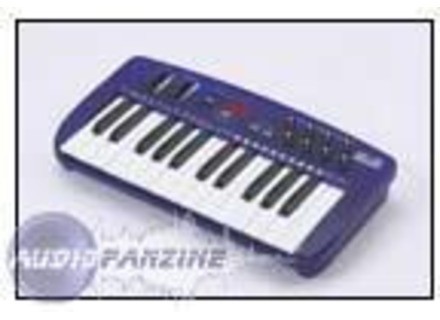 Ascii's review (This content has been automatically translated from French)

Studiotech MC-25
4
This is a small midi keyboard with particularity as to have eight rotating potentiomtres. It is this that motivated my purchase. The advantage of these eight knobs is that they are customizable, you can choose the number twelve o'clock. In addition, the keyboard can be plugged into the port joystic of the card without adapters (Note that the keyboard can be powered by this decision). Otherwise, the classic connections works fine.
There There's a possibility to connect pedals

The purpose of this keyboard is not to simulate the feel of a piano. The MC-25 is primarily used for applications such as Reason. Personally I use the buttons to send samples or effects.
As for its ease of use, it is remarkable. Besides a manual thanks brief and well done.

The report qualitprix trs is interesting, for 150 E acqurir you this little wonder. Since I do not I let go, it is very enjoyable to use and configure. My only BMOL would be the solid knobs, I have a little doubt about their Longva. Otherwise I think it's a very good buy.
Did you find this review helpful?yesno
»

Studiotech MC-25
5
Well it is simple, easy to use, enjoyable to touch, look "Epok tek" but frankly it is done with AC 2 octaves: grate bass lines ...

for those who have yet to state the MIDI keyboard, you'll see it brings a lot of things, no not abandon the sequencer or the same matrix in Reason but hey ....

it happened before the wave "gray" usb, but with a sound card based on a MIDI IN, it allows the use of one hand, it leaves a free USB

I regret, most cheap midi keyboard today really have no wheels of a cot MC25 ... grate to cool keyboard lines aphextwinienne twisted Młoda of basic, low restless ... because the music will look and feel with the sound right? ben the electro kitsch c, c is 2 octaves and big wheels that we like to grind, a level knob that should be on all the synths ... Here c c cheap and good
Did you find this review helpful?yesno
»

Studiotech MC-25
3
In the era keyboard format 25 was enough for me.
I had too much space and not PPET c'tait my first MIDI controller.
So I jump on the product: Controller, blue design not too ugly.
A MIDI out, taking a pin to connect to the old ordis.
The transformer is provided.
8 knobs, pitch and mod normal.
Caracas is for maximum 6 / 10.

Soft touch, not great but I've seen worse on synths and keyboards control more expensive.
Simple to start, a work quickly.
It assigns every two UP / DOWN buttons and keyboard keys that have a dual function.
Remember the whole manual.
Simple and fast but could do better: 5 / 10

I use it against my will and lack of space for almost 10 years. I think it was in 1998.
I bought trs shortly APRS its release.

It is compact and still holds 90% of the road.
Merdouille against it by the transmission of information with some ppins MIDI MIDI continuous. The keyboard rpondent well in almost all cases.
I've had others since, but lack of space the MC-25 is still the most used at home.
It's not got through!

Report qualitprix pretty decent even if I always cass the ***** to put as many in a poor bl Controller.

Looking back: there was not much choice the era. Since there were the M-Audio Oxygen (almost copies) and many much better keyboards. I do not advise it and Exceeds unless you have blackjack it has no Intrets.
We'll see if the current EMU have the same life. It still works, it's the main thing.

Subjectively: 10 years I have under my nose, I start having my slap!

October 16, 2009 EDIT:
I still have the MC-25. Even if it is plastic is its strong avre. Today I am fortunate to have available an Edirol PCR500. Trs much more upscale, more complete, USB and everything else. The MC-25 does not compare: not the same number of notes and not the same age. What happened to the MC-25? He still serves. I still use it to drive expanders or virtual synths in addition to the PCR500. It's a little keyboard matre ddi effects, or anything that does not need to be on a keyboard XCUT long. The Studiotech is adapted to play a bass line or the trig loop. The PCR500 has pads for rhythm, but the keys on the MC-25 can be complmentaires.
In a set up with three keyboards, I use the MC-25 for bass, TRIGA samples and effects, the PCR500 for lead and Ensoniq SQ2 for organs. This is an example.
Sometimes I use the MC-25 when I do not want to connect the PCR500 (which takes much more space) or that I drive an expander without turning on the computer.

The MC-25 is fairly compact, it arises without much problem on a desk or on the hood of a synthtiseur. It was for him to be practical plutt solid and cheap. Sometimes certain dlirent touch with a contact cleaning the problem disappears.