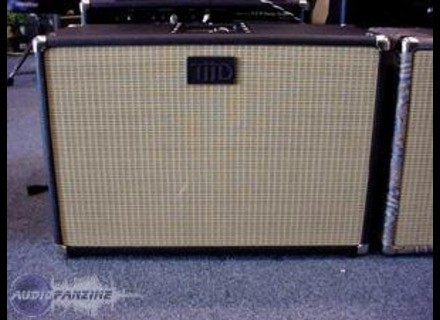 Thd 2x12 Cab
5
I bought this cabinet used after reading many glowing reviews in Guitar magazines 15 years ago, and ti this day it still is my go to cabinet.
It’s a very small, light, slot ported 2x12. Made out of birch ply. It had a very even response with the Celestion Classic Lead 80s modded to THD Long Horn speaker specs. But that speaker didn’t work for me for close miking with a Shure SM57.
Over the years I’ve been through lots o different speakers in this cab from Celestion Greenbacks which funnilky enough sounded more like an Alnico Blue than a Greenie, Celestion H30 which were missing bottom and had too much top, a set of vintage H30 which sounded quite lovely and nothing like the re-issues. To Emminence Red Fang Alnicos which were a lovely speaker, from there I wanted an Alnico that was able to stand more than the 30 watts that the Red Fang is rated for which brought me to the Ceslestion Gold. I used that set-up for like 3 years, adn after that I settled on Celestion G12-H65s, which is like a less bright Greenback in this cab.
Some where along the way I rewired the standard set-up of 2 parallel jacks that lets you piggy back into a second cabinet whne used with an amp with a single speaker jack. Now it was two inputs so I can use it as a regular 8 ohm mono cab, or a 2x16 ohm stereo cab for my rack set-up.
I’ve been through numerous 2x12s with numerous speakers from Rivera Q-cabs, Guytron closed back, Mesa Recto cabs, etc... but none of them ever did what the THD 2x12 was able to. Not wanting a 4x12 behind me. The THD cab doesn’t sound like a 4x12, only a 4x12 does, but unlike other 2x12s it isn’t missing the bump on the bottom around 110 Hz, and that sems to make all the difference for me...regardless of this years speaker choice I load into it.

Only downside it's slightly narrower than my marshall head.
Did you find this review helpful?yesno
»

Polaroil's review (This content has been automatically translated from French)

2 HP plume "THD vintage" and "Longhorn" 80W unclear origin: celestion G12H30 priori inspired and Lead80, but "made specially for THD," may be by Eminence In short ...
No data on performance, but I would say an average sensitivity, 100dB infrieure

In any case a ring. Finally found the cab to go with my head THD Bivalve 30W (depending on the lamps used). The overall sound is warm and plutt serious, never aggressive, but still grazing and Submitted. The clean sounds are rich and balance, such as saturation. The midrange and bass are Submitted, treble balance. All styles meet there without problem.

A high volume, drive by or a marshall 100W Bivalve, has held very well, with punchy bass trs so will have to look into "palm-muting". The dispersion is good even if I could not compare with a 4x12 CTBR />
BMOL 2: The price and rarity in Europe, the lack of steel corners and the fragility of the coating Tolex. A cab upscale and versatile, trs recommended if you buy good price