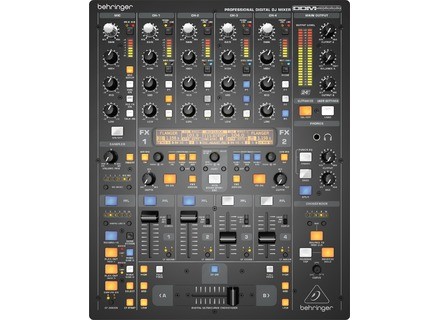 View all offers for Behringer DDM4000 »

Behringer DDM4000
4
The Behringer Digital Pro Mixer DDM 4000 is a pretty decent mixer. When I purchased it I was expecting a lot better, I have used other Behinringer products in the past and they have always created affordable products for what you are looking for but most of them are baseline and nothing special. That’s what this mixer was too me, just a baseline unit. Price is good, but the quality isn’t great there are a few other mixers that you can get for about the same price as this one that are better quality and have more options.

This Mixer has 2 Microhpone impurts and they have Gain Eq, and a few FX that you can use. You have some BPM synchronized knobs and a crossfader start options. One thing I like a lot about this mixer that I feel some other mixers lack is there is a button that you can push that will restore your previews mixer settings that you have used before. This is great because you don’t have to go through and do all of the same stuff that you have done before on your mixer. Never seen another model that can do it quite like the Behringer Digital Pro Mixer DDM4000 can, its pretty simple.

No hiss generated, eq was simple nothing to complex

Overall the Mixer is pretty good, its high quality and it has a ton of creative tools and an ok layout that will take some getting use to, but like I said before this isn’t something that you should get if you are a working dj, because there are other models out on the market that will blow this one out of the water for around the same price. Benhringer always delivers affordable products though, so for that reason is why I gave this mixer a try. I will give any company that has a good name a try over one that I have never tried before.
Did you find this review helpful?yesno
»

Behringer DDM4000
4
Two mic inputs, 3 band eq, beat synced sampler, 4 efx sections, full crossover, midi control, Stereo out. 32 bits. Also has most other standard features you would expect. The beat and BPM features are impressive. Also the crossover features are very functional and come in handy if you like that sort of thing.

This is my "beater" mixer. I bought it without doing a whole lot of research. I needed a unit under $500 that I could drag with me when I was in a hurry. A friend recommended this. I'll start with what I like about it. The inputs are good and I never have an issue with a lack of any of them. I don't even use all 4 channels usually. Every so often I will have an odd situation that calls for an extra channel or 2 so it's good to have as an option. Fading between that many channels can get crazy if you don't know what you're doing but the layout of the ddm is pretty sensible. For newcomers who have used an actual mixer board before, the DDM is moreso like a real mixer than other "DJ" mixers I've found. For a guy like me coming from a live audio background I find this to be great. Although there's something to be said for a unit like this that can sometimes feel like it's trying too hard to be 2 different things sometimes. Just something to keep in mind.

Now here's what I don't like. First of all my sub out doesn't work and never did. The fader sliders feel wrong to me. I'm not sure how to explain this other than saying they just aren't very comfortable to use. The tolerances are too tight? Also the gain meters on my unit don't show up too well unless it's very dark. I guess this isn't a huge deal since most of the venues I go to are fairly dark but still it's annoying. Other than that though I like this unit. The buttons feel good. and the knobs are okay.

Sound quality is surprisingly good. I find that Behringer stuff usually has a pretty good level of quality with sound while the hardware suffers more. Obviously my sub out not working is a bother. The eq is just okay. Nothing great but it works. I've never had any hiss issues. I know someone told me it had a built in noise husher or something but I didn't see anything about that in the manual.

Like most products, it has to last, and considering the amount of times I have dragged this mixer around town, I'm impressed that it's lasted. It seems to me that Behringer stuff that breaks, is going to break very soon after buying it, and then it will never mess up again. Fortunately mine is mostly functional after 2 years of use. It's not the best mixer I own but for the price I like it. Well kind of. Honestly I feel like this unit should be more in the $300 range. Yes the features are killer but it's behringer...
Did you find this review helpful?yesno
»

Easy to use for experienced users. A few hours are enough to manage the device... It's great considering the numerous functions it provides. The main functions are easily accessible and the user's manual is very clear.

It doesn't add any noise in spite of my 10-year old sound system.

The EQs are as effective as Pioneer EQs and their response curve is very progressive.

I've been using it for four months.

Pros: Sound quality, overall power. Behringer surprised me with this mixer! I expected an unreliable device in demanding situations. The mixer works perfectly even when I use two complex effects, two simultaneous samples and all outputs. It's a great improvement compared to previous Behringer products.

Cons: the blue LEDs are too bright!

Based on my experience I would certainly buy it again. The durability of the mixer is still to be seen... Talk to you in one year
Did you find this review helpful?yesno
»

RaidenStevenson's review (This content has been automatically translated from French)" Behringer? Often criticized, but never equaled!"

Behringer DDM4000
4
The connectors are very comprehensive!
Double box effect is really impressive and complete. Integrated MIDI box is a bit disappointing against is the reason I drop a few points.

In a childlike simplicity. On the other hand, rarely has a difficult table to use ... The manual is comprehensive but not really useful. It flashes in every direction, it is quite pleasant to take over because the buttons are easily identifiable.

The equations' are nice, really accurate. For against the blast, it was always the black point of Behringer. I mixed on speakers of different sizes but when the sound is too loud, CRAC, breath sounds.
The black dot!

Used for a little over a year and a half, I had tried many models before this one. The grip is happiness, the effects are rich and accurate. The knobs are a little toy in the long term, they slide a bit after daily use. A quality / price unbeatable! With the experience I would do this choice with his eyes closed. I would put a caveat for the user looking for a table for celebrations, parties etc. ... breath is a shame but not off-putting!

Did you find this review helpful?yesno
»
Read the 40 user reviews on the Behringer DDM4000 »