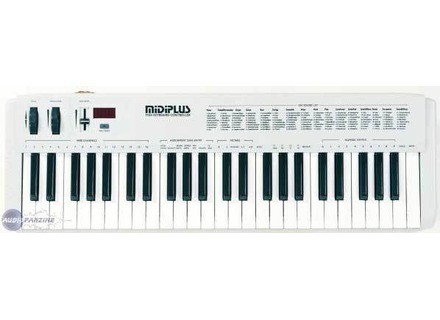 Acarian's review (This content has been automatically translated from French)" Fabulous"

Studiotech MIDIPLUS
1
Noon at the old connector PSU weird, I advise you to not lose ^^

The touch keyboard is it enjoyable?
Super, super soft keys in the middle, and hard keys to two ends, poorly proportioned keys, we do not run your finger between 2 black not compress it, it's great.

How long have you use it?
It has just five years closet.

How would you rate the quality / price?
It's a great deal, but at the cost of the weight of metal in it to sell to a scrap dealer, or € 0.11.

With experience, you do again this choice?
Rather die

Elenel's review (This content has been automatically translated from French)" We'll see ..."

Studiotech MIDIPLUS
3
I want to clarify that there are different models for Studiotech Midiplus, mine has 49 keys, a MIDI output, the Joystick jack, battery compartment and a sustain pedal input ...

The fact that there is no power supply other than the joystick and batteries is a super bad thing, already there is no usb ... In 2013 it is a bit limited joystick port. I bought the batteries the same day, he works in it, I would self later.
Bah if there's the bare minimum or less already said the connectors.

Well this is my first for 35balles ttc it's cheap to connect to my MPC1000, after chai if I'm not lame midi or what, but the 16 levels does not work with the keyboard, so have to create a program pitcher and your sample 49 times, boring. The pitch and modulation are not taken into account either ... So to strum a little tune and make bass lines is what I need after I plan to learn a little piano, I see.

Velocity is good, no worries, what is more adjustable. The aftertouch not had time to use it, but who cares ...

The manual? The guy has not sent me so ... I searched the internet, there's one of midiplus61 in English, and brings nothing.

Well after that there's the midi out, so you plug cable MIDI, you put the receipt of all channels on the MPC, and then what you get for MIDI, so very simple signals.

I already had a sound problem that continues to play even not pressed, simply press it again and it is good, but still it is a bit sucks.

I received that same day, I would bring more precision and as far.
This is my first so not much comparison, I often had the feel of a real grand piano under the fingers so it moves away thoroughly, normal, but hey it's what his taf ...
Value for money for € 35 in pdf, bah in my opinion it's not too yucky, but if I had a power supply that would have been, a USB port, perfect.

Good in 2013 is archi has-beens like connectivity, but if you have less than 30 € for it can be a good deal.
If I could have a power supply and a USB port I would have taken, but good enough for me that it j'pense.

opentuning's review (This content has been automatically translated from French)

Studiotech MIDIPLUS
4
Midi Keyboard 49 keys with pitch and modulation wheels.
Dynamic touch.
Power supply, joystick port (I have not tried) or batteries (not tried either)!
1 Midi out, entrepdale sustain.

Touch is very enjoyable for me, as VLOC adjustable on the keyboard itself, but I did not of references compared to other synths , pianos and keyboards ...
Trs easy to use, easy when you know at least what the keys are custom settings.
Manual clear and satisfactory.

I have this keyboard for a month. It is simple and j'apprcie.
What motivated my purchase is the price, used less than 50 for the home studio is royal. No need for me to have 50 buttons or 61 buttons.
Consquent by the ratio Q / P is good for me.
With exprience, I remade this choice, but even more tt!

C@rlsberg's review (This content has been automatically translated from French)

Studiotech MIDIPLUS
4
I looked at the time, there are about ten years, a small cheap keyboard controller to connect to my computer. I found this keyboard in my favorite store. It's all for the price for its simplicity of connection to the computer (via the joystick port) that I bought.

Touch is quite nice. The selection of banks, instruments and other functions is via the 49 keys.

I have never used the other connections (pedal power - that of the PC only - ...)

Touch is quite nice. A little soft now that I can compare with a more professional touch. When I bought it I knew almost no play on the keyboard, so it suited me perfectly.

The selection of banks, instruments and other functions is via the 49 keys. Used to it quickly.

I do not remember if there was a manual or not, in any case, even for a novice, it's simple and effective

So after many years of loyal service, it still works. I do not know if I'll get rid of but if so, I regret not to have ... oh, and then so be it, I care!

For someone who wants a small keyboard to get your feet wet, to start, or just to have a simple and reliable controller, I highly recommend it, and I repeat it again though.