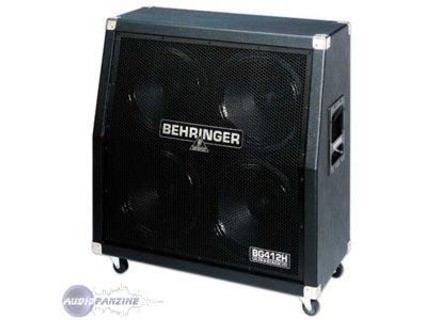 Behringer Ultrastack BG412H
5
I bought mine from Musiciansfriend.com for about $250 including tax and the shipping, the shipping added in like an extra $50, but it's worth it!

This cab is great, it can handle up to 400 watts! It gets very loud. Your tone comes through very nicely with this cab. I use Peavey amps, I have a few Peavey heads and cabs, I ordered the Behringer cab because I ordered another Peavey Head and was low on $, so I found a Behringer cab. I am so impressed with this cabinet, I am ordering a few more now, I like them better than a few of my Peavey cabs. I ordered 3 more of the Behringer 4x12 cabs, 2 straight, and 1 more angled one, they should arrive in a day or so. Don't think this is just some crappy, cheap cab, this thing is better than many cabs I've played through.

It weighs much more than most of my other cabs, and since I ordered more, I am gonna have to get some more help bringing these things around. I think they weigh about 103 pounds, most cabs weigh in the area of about 75-85 pounds. A few extra pounds is worth lugging around, because these amps are worth every penny! Also, I replaced the wheels, the stock wheels are pretty annoying. When I order my 1st Behringer cab, 1st off, UPS screwed up my delivery a few times, 2nd, one of the speakers inside were dead, sent it back, musiciansfriend sent me a new one no charge, the even paid S&H, but once again, UPS screwed up my delivery. It took me a while to get my cab, but it was worth the wait.

These things are tough, I just wouldn't be kicking in the grill or anything. They weigh about 103 pounds, so they are very tough, built nice and strong.

You see the price and think, "they are probably cheap crappy amps," I don't care if you don't buy them, they are like my secret weapons. They came out with a brand new head, the LX1200H, I already ordered two of them, they are on the way. I tried one of the new heads already, you want versatility and great sound, literally, check them out. Behringer has become my secret weapon. I can't wait till my Behringer heads come in, everyone is going to be asking what I use, only the people who read this review will know. And yes, I've played through more amps than most people, Marshall sucks, they are overated and overpriced, Fender is good, but not good enough, Peavey is awesome, I own a ton of Peavey amps, no complaint with them. I've played through a bunch of other amps too, I just wouldn't spend so much $ on most of them. Trust me, check out Behringer, they are secret weapons!

matz's review (This content has been automatically translated from French)

I use it with the V-Ampire both mono and stereo that I have to say that it really provides.

I use it for a year and a half RPET with the group and in concert. I really have no problem with except that it is too powerful! ... lol

Over time I headed towards the speaker or surround sound BG412V Behringer's latest quip of BUGERA aluminum cone with.
Did you find this review helpful?yesno
»

Behringer Ultrastack BG412H
4
Yeah, well I've purchased in January 2004 and I must admit I was really surprised. this amp is ugly (very ugly, even) but it sounds quite honest, that is to say that in terms of volume rendering of the sound spectrum, much below than above rgime, follows. berho this is a very good average and gives a really rglo his stack with a lot of bass. it is really powerful and "large". its main default is that it does not really great character ... AC must be said that makes her a rather cold, without a grain without him, almost a swears neutrality ..

good that said, it is stereo and I do not know about you but for me it is very handy and the fact that it is so cheap (288 euros in Köln) left me somewhat stunned. which composes the Jensens are robust and well crunchent overdrive. the sound is fairly distinct, we find ourselves not in full-meli melo sound (even at high gain). nanmoins which is questionable, some soloists like the notes intertwine naturally. other apprcieront to hear out their notes (note that this is only part of the chain).

level construction, as I lai said, it would say a big oven (it is very compact cabinet that), it is far from luxury models, it's really the base. That said, it's solid, the wheels have yet dtach (but not running any more, ^ ^ ed in 2010), the grips are reliable and has perfect resistance to use "on the road "over 3 years. I'm not that surround change anything but hey I did not test so much in that either ..

I think it's a good entry level speaker. Report qualitprix is ​​ensured.

attention to the new versions are equipped with BUGERA and I do not know what worth ca ca on the other hand.
Did you find this review helpful?yesno
»

Behringer Ultrastack BG412H
4
Buy in October 2004.
I report quality price, but at least its Aesthetics, although ultimately it is not so dramatic.
Frankly for the price you can not do better. The HP is good, however some brands like Fender or Peavy use the same for a price significantly suprieur. Nothing wrong with the finish is solid.

I like the fact that it is in STREO or mono, and relatively powerful (400Watts). The sound is neutral trs, which is perfect for my configuration: V-AMP2> power amp> 4x12. It keeps the color of the HP Muls V-amp.

With the exprience I would do not have that choice as buying a 4x12 was quite impulsive (my first), and I DEFINITIONS glimpse it unnecessary m'tait for my style of music. I do not need so much power and such a big cabinet.
So I spare, but not at all in performance, would recommend.
Did you find this review helpful?yesno
»
Read the 9 user reviews on the Behringer Ultrastack BG412H »