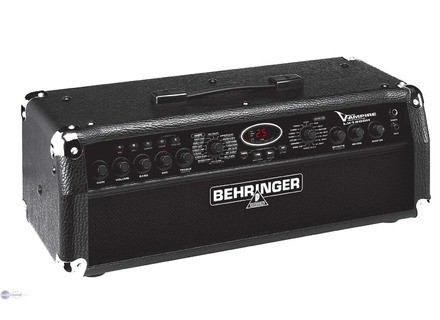 To0061's review (This content has been automatically translated from French)

Behringer V-Ampire LX1200H
5
Modulation amplifier, 2x60W.
C the connections in jack or XLR, two MIDI outputs pr Tlcharger effects from the net for example and it connects mono or Stereo.
nivo rglage as usual, trebble bass, treble, reverb, volume, gain
The volume is good ossi gnral, and the effect such nivo can fall the volume of the selected effect
uh otherwise Indeed, while flanger, compressor, chorus, pingpong, delay, phaser, wah and Pliny of the pr and pi ur distortion, the fuzz and crunch, the ac c amp simulator !!

also, there is a display and the LEDs indicate the pr rglage everywhere, has a nice effect fai qd is lighter!

Nivo configuration, g vraimen pa has to complain, c well organized, the effect of a cot in the rglge gnraux ur and amp simulation o the middle, a DC will.
alor nivo sound, good guitar playing too franchemen May, the sound is exellent, san about the enregistremen. This is perfect t ^ te ossi pr play well as to register!
As o manual, very clear ben c, the manual has been trimmed anglai ke one in French, May good enough to be in cal anglai !!

So nivo sound perfect for me c!
I play mostly nomtal and I both a clear nikel k'unebonne distortion, and an enjoyable, pa a ki ki grsille and spit!
I play on a PLO figure and g nivo effect a marshall jackhammer from home and a crybaby wah wah dunlop home. Ben c perfectly, I would say the wahwah ke ki Manke is the effect, finally voila.
my sound prfr nivo Indeed, the Flanger is great, the compressor is in May if you put a distortion attention to feedback if the head is a substantive fo be careful.
nivo amp, tt is the type of distortion and clear sound (american blues example), and finally voila.

I bought my head in Anne of beginners. I prfre is logical, the modulations, full effect and amp simulator, with good cleans ETDE super distortion (DT the "wild beast", the name means tt dir). The tuner is integrated and very practical and can be programmed effects.
Just a point ngatif and again, the letters pr program are all up so very visible pa pr qd caught himself is played upright, May c tt.
For me, the price quality ratio is very well, I sui compltemen happy with my head, and if offered the choice, I reselect that the
Did you find this review helpful?yesno
»

-grm-'s review (This content has been automatically translated from French)

It sounds inch of tt Numerik anologik it sounds (we say Prek a lamp)!
the effect is good in general be

C surtt a good product for its price

Ultra easy to use.
The factory presets offer some good dj effects.
The manual, without being terrible, help if you meet some problem.

It is ideally suited my style of music (Mtal). The distos are not bad at all and the effects can make very nice tips.
I play it with an Ibanez GAX 75, I use the FCB1010 MIDI pdalier home Berhinger controller for the V-Ampire.
Simus are some excellent amp on the other are not great, seeing unnecessary adpend obviously what is in fact and use.

I use this head for about two months, and I am satisfied with TRS. The report QualitPrix is ​​simply unbeatable! I bought 235 new! It really is perfect for small purses seeking a more than correct. J'tais millionaire if I do not have that choice would do, but since this is not the case I would do without hsiter!

I buy the Board of FCB pdalier 1010 with the passing of an effect the other for the controller wah and other effects ... There is no problem to program, since it is also the Berhinger. It works well with the V-Ampire.
Did you find this review helpful?yesno
»

bidroid's review (This content has been automatically translated from French)

OK sound for versatility, while impeccable, I personally acht to be able to program my sounds and execute sets without having dozens of pedals on the floor.
amp simulations and effects are good enough to use a semi-pro.
programming simple and making heads at the knobs.
we obtain easily the sound you are looking, do not ask for the moon, it's a modeling amp, which allows for a reasonable price, good sound palette.

I use it with my GS GIBSON is true that the guitar there's a lot must therefore have the need to scratch to get the most out of this amp.
good definition of saturated without reaching the grain really lights but the simulation is good trs.
sounds in the clear is pretty good too, just to get the setting that offers a really good diversity in the delays and tremolo and flanger effects type.

I just bought it and frankly recement for the budget that we must invest, or about 460 euros for the amp and speaker cabinet that goes with it is buying more than reasonable, for beginners as for the other c is not good stuff trs trs expensive and powerful, has the height of the renaming of BEHRINGER.
Did you find this review helpful?yesno
»
Read the 11 user reviews on the Behringer V-Ampire LX1200H »