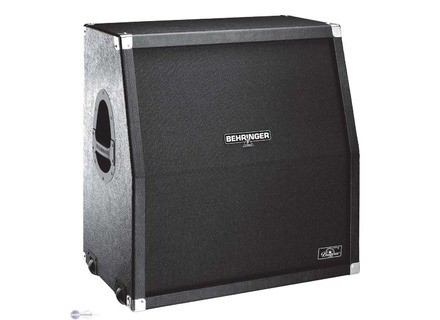 Behringer Ultrastack BG412V
5
I bought this ultra heavy speaker box in 2007 for around AU $450 because I had heard good things about them. I've used it on a Vox valvestate as an extension speaker and then a Bugera 333 Infinium head. I also own two original Rola Celestion greenbacks from the early 70's. I have also owned Marshall 1960A quads in 12 and 10 inch configurations and a 2 x 12 Marshall box.

Compared to my original 70's greenbacks, they have a similar frequency response except that the greenbacks have stronger upper mids which are quite nasal. Greenbacks also have very tight low end whereas the Behringer's bass and treble are a bit softer. Now, there's a caveat on this review. My understanding is that the Behringer cab is made of chipboard whereas my greenback enclosure is made of ply and pine. My experience is that chipboard takes away some of the high end and makes the low end less refined (something to do with how the sound reflects inside the cab and absorption of frequencies). I bet if I put the Behringer (i.e. Bugera) speakers in a plywood cab that the sound would improve somewhat.

But the cab sounds pretty good as is. In fact, I like that the speakers take away the harshness of my valve amp. The original greenbacks are great but the nasal upper mid range reminds me too much of Marshall in your face sound. I like even mellow tones that stand out but don't overpower. With some EQ-ing, I can dial the upper mid range back in. Not quite the same as a greenback but in a mix no one can tell the difference.

If you want the standard Marshall chugga-chugga in your face, go for a Marshall quad. If you want death metal, go for an Engl cab. But if you want a pleasant all-round tone that does rock, fusion, crunch, overdrive and clean sounds well, then this is a great cab. Considering the price, you can't lose.

Although I haven't opened up this cab (which is unusual for me), it appears to be well built but it's bloody heavy. Then again, it's been in my studio for 11 years and last time I moved, removalists did the back breaking work for me.

Bugera, which is owned by Behringer, now make quad boxes. They go for around AU $460. The speakers in the Bugera cabs are called 'Turbo Sound'. I have no idea whether they are the same speakers just rebranded. If you come across a Behringer version and you're into jazz, rock and fusion, this is a great cab.
Did you find this review helpful?yesno
»

ugo7's review (This content has been automatically translated from French)

Behringer Ultrastack BG412V
5
J uses the cabinet for 3 weeks, ke I love the most is that finishing c (c is the costo!) Its sleek look and of course the sound it gives off! It has 4 hp 12 '50W Jensen Bugera from home (mounted on some Fender and Peavey by the way!) Ki guarantee its net kel ke is the volume (200w it's the margin if .... is not a metalhead nags of course!). It plugs into 4ohms mono or stereo 8ohms. I use a behringer lx112 v AMPIRE kelle and the fact does not color the sound keeps the sound of the amp lx112 simus. Of course the fact that pregnant ke neutral not be a disadvantage for those ki uses typed in his amps, but good for 235 euro c Playback is a great deal and I do not regret it!!
Did you find this review helpful?yesno
»

wildted1's review (This content has been automatically translated from French)

Behringer Ultrastack BG412V
5
I use the 4 * 12 for about eighteen months, coupled to the v-tone gmx combo 212.
Neutrality can best use the capabilities of modeling, but I tested it with a laney head TT50H, and four 50-watt speakers BUGERA cashing perfectly the cavalry ...
It must be said that this cabinet has a trunk of 4 * 4 U.S. ...
I also, and especially chosen for its price, because in behringer, I have never been disappointed, and 265 euros a speaker 200-watt stereo nine, there's no photo.
This proves that the price is not necessarily a guarantee of quality and vice versa.
Behringer I am a customer for two years, and frankly, I'm here I stay, because even on stage, the gear is largely up to its commitments, and I do not see or is the interest to to ruin the fun of playing on a Marshall or a H & K.
So I stand by my choice.
Did you find this review helpful?yesno
»