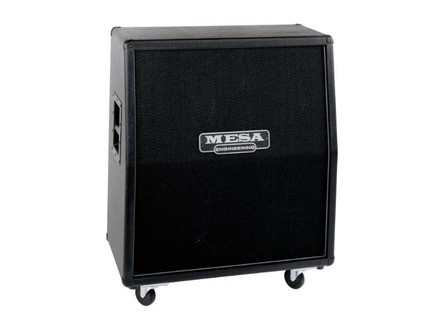 Apart from a considerable weight, this speaker is the 4X4 scene!
Thanks to 2 types of speakers in the amp, you can choose to use only the V30, C90 only or 4 at the same time.
Personally, I use 4 because the V30 provides the power, aggression and attack well-known speakers and some Marshall Mesa, but try to give her a little stiff and cold easily corrected C90, much hotter with more low mids than V30.

Megajp's review (This content has been automatically translated from French)

Mesa Boogie Road King 4x12 Slant
5
I use it for three years. This speaker is huge and very heavy (in all senses). I have finally m buying two small Marschall HP for small rooms.
Rapprt The money is not measured here, that is the perfect complement to the Road King head. It is expensive but that is the great speaker. The grave's beautiful, the saturated are not aggressive, the speaker takes 120watts of the head without flinching.
Outdoors that is nickel, it means well, as colleagues!
What happiness
Did you find this review helpful?yesno
»

gabe's review (This content has been automatically translated from French)

Mesa Boogie Road King 4x12 Slant
5
-How long have you use it?
I bought this cabinet there are about 6 months (RPET and concerts)

- What is the particular feature you like best and least?
what I like is the sound it gives my head amp (JCM900), a big rock sound, be careful not metal as some may think, a big rock sound very well Dfine.
a more open and real Submitted bass and treble that you saw no ears, and mediums who play their RLES.
It is true that there is a inconveniant ... The weight ... size ...

- Have you tried many other models before acqurir?
Before I had a Marshall 1960a (very good speaker) but I found its not my ass Dfine taste and a little search, the sounds were lost (for the sound I DSIR, for hard, punk, blues and funk are the top c)
Acqurir before I tried different models from several brands including Marshall and a Mesa home.
But the problem is to find stores with stock cabinets.

- How do you report qualitprix?
The price remains same when an investment.
I bought 1190 euros new and in-store (no bargain / 3 year warranty)
there are still shops with reasonable prices!

In the beginners I wanted to change the head, because I thought the bad sound came from it (after all I've read or heard about jcm 900) but my bank has given due my bank account, so as I had from 1200 to economy, and that that price I could not find the head of the amp that suited me, I pulled the baffles (of good quality s!)
After some trial and dsillusions later, I plugged my head on the jcm 900 4x12 Road King, and my surprise, I finally found the sound I was looking for for years, a big sound Dfine rock well.
So quality award is a big investment, but ultimately I end up with a scratch amp (head + cabinet) that comes back to me about 1700 euros.
FYI I play sound with a Fender Jazzmaster and Telecaster and a Gibson Les Paul Standard.

- With the exprience, you do again this choice? ...
I will do it again Siter choice without a second,
as is often thought, that the sound comes from his head amp,
but when the baffle essait quality was nice surprises.

After all this is my opinion
and above all a choice of,
because this formula marshall / mesa will not agree all the musicians and all styles.
So, make your own opinion, before you buy.

Jimmy Chaos's review (This content has been automatically translated from French)

Mesa Boogie Road King 4x12 Slant
5
I use these speakers for about a month.
it should be noted that they have a big particularity is essential even when:
- There are 4 HP 16ohms
- You can plug into 8ohms on both HP left (input A) or right (input B) and then on 4ohms 4 HP (input A + B)
- The HP has left her a "Vintage" while those on the right sound "Modern" (or vice versa, I do not know, but it's even big interest).
- They really t Designed for the Road King 120W head, this amp possde a switch that allows you to pass the baffles baffles A B or A + B.
It is a heavy investment, but that's all, if you want the good stuff trs must empty his bank account: s

It is also essential if you want to use the head Fully road king, it will be a shame to break such a beautiful string of stuff. ^ ^
Anyway believe me when I show these speakers and I made the costs, I am the pte and I am fire!
Its use is especially during the concert (in the BPS there home mesa 2x12).

Did you find this review helpful?yesno
»
Read the 6 user reviews on the Mesa Boogie Road King 4x12 Slant »