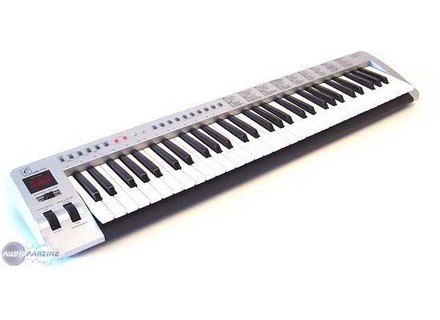 Golio's review (This content has been automatically translated from French)

Evolution Mk-361
4
61 keys, something quite rare on keyboards master amateur. It is very convenient and saves me ca play with transposing all the time, eg when programming of batteries: it has access to everything the kit immediately.
The connection is quite simple: a USB port (cable supplied) and a standard MIDI Out port (cable port joystick afternoon din supplied). It allows to control a pc as well as a sound module. This is also what motivates me because I have a motherboard with a via KT133A, the Via chipset problematic. The problem in question is directly related to the usb (particularly to the supply via the USB). So I was sure the keyboard midi out to my normal sound card if pb ... But the bp has been resolved by using patches for a while now and it frees me so the joystick port for something else (in this case, the pod).
For the rest: dynamic touch light, several velocity curves possible, multiple patches, transposition, pitch wheel and modulation, volume fader, sustain pedal input, etc ... in short everything that is basic to a master keyboard.

Touch is hard enough for my use and flexible, although I increasingly want to spend a semi lourd.Mais the prices are not the same.
The config info is quite simple in driver: under 98 you must install the USB, and XP (not tested in 2000), there's plugguer! And set power on ... necessarily. It is advisable to mount the drivers of evolution for better perfs, but it can very well turn with the default driver from XP.
The direct configuration of the keyboard is quite simple, some key combinations allow you to access the cfg Advanced (combination type shift + key)
Manual: I got it in french dc no pb. A 10aine pages is not much, but on the other side is not an airbus that sells you!
Also note that the site of evolution is quite complete with manuals (in french) and updates of drivers accompanied readme in french too.
As against the apps that come with ... Actually I tried to mount them out of curiosity, and I demonte that evening ...

I use it for 2 years now.
I quite like the simplicity: you plug, you play. As against less like the absence of additional controllers (but this is also due to his age). He is also a bit cheap, but at the price where it is, it's rather normal. And finally there is not really ...
I tested other models before, in the same price range, but can not remember which. He had the best touch.
The value for money is rather (was) not bad. By revolutionary, but far from being a thief.
Is what I would do this choice? it depends: if the supply was still limited in this price range or at the time I bought it, I referrer that choice without much hesitation. on the other hand today ... I would tend to a kind edirol pcr 50 for a few euros more than the mk361 now (but at the price I bought mine)
Overall I am satisfied, and I envisage no way to change the keyboard for now
Did you find this review helpful?yesno
»

dantoc's review (This content has been automatically translated from French)

Evolution Mk-361
1
I beginners with this kind of hardware and implementation as well as USB trs good quality keyboard, 61 keys directed my choice.

The keyboard is flexible trs enjoyable to play.
The configuration is something else.
This is not what is complicated but the manual only in English, apart from a brief insert of trs intal in French, is, even in perfect English bacl

I try to used this instrument for a week, although I get a little PRSA get something, the bundled software are not so assurment.

Although the download of various patch program on the site of evolution, "music teacher" does not DMAR (windows application seeks a 16 bit)
Sound and Studio 2 software sequencer provided the machine plant trs trs often with this blue screen that I had seen for 98 win, meaning that the manufacturer rfrer recement installation program!
Did you find this review helpful?yesno
»

Evolution Mk-361
5
The key CHARACTERISTICS that motivates my choice are the 61 keys. Note that this keyboard is also available with the knobs to better control your virtual instruments ... but the price is much higher, so my mouse will do.
Possibility to connect a sustain pedals.
The connection is normalent USB, so no MIDI cable provided, it's a shame I had to buy a spare, and an AC adapter.
I do not use the USB because I find it too heavy, the latency is more sentire, and some bugs appeared to me. Every time I turn on the keyboard while the computer's USB power s'teind and comes back on, which has the dye consquence of the modem, and my card M-Audio Quattro. I just rebooted lfaut, made moan. So I prfere connect the keyboard to the MIDI sound card, it is more flexible and faster.

Touch is very lightweight, but still enjoyable for me. I use it to control virtual instruments, I do not make a piano, so it conviend me, I would not need a better keyboard.
The configuration is as simple as I use a Mac running OSX. No drivers to install, they are dja implementations in the system, recognition is IMMEDIATE, and configuration of ports and more than simple CHANNELS.
The material is lightweight yet sufficient and if you read more possibilities there are in a pdf Tlcharger much more Retailer.
The bundled software when they are quite mdiocre to use relatively amateur. Do not install them, you are wasting your time.
I do not use the patches I find it useless in my work, so I will not say anything.

I use it now for 3 months and I am fully satisfied. The report is qualitprix INTERESTED. I SSAI Edirol of models before taking it, but there is no diffrence gross. I do not regret that choice, and I do not intend to replace it for quite some time.
Did you find this review helpful?yesno
»

sporniket's review (This content has been automatically translated from French)

Evolution Mk-361
4
I opted for the 61 keys, and because I did not need an expander, my computer is enough.

My use is simple: I enter the notes to the keyboard not not, can I correct the VLOC so touching I do not care. I only use the transposition for comfort.

There is latency in the USB, against the MIDI port is nickel. The software provided is twelve o'clock trs low end, but personally I do not care compltement, as I have my own software.
Did you find this review helpful?yesno
»
Read the 6 user reviews on the Evolution Mk-361 »