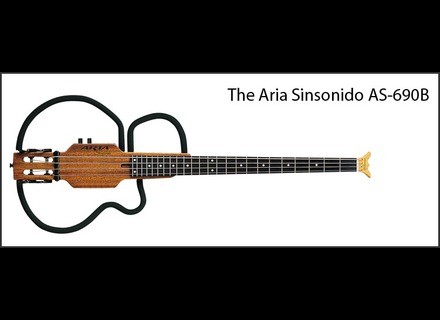 herrkapelmeister's review (This content has been automatically translated from French)" But they mount the handle to the ..."

Aria AS-690B
5
... These coyotes liver yellow.
Well no, it's anything but a mistake of nature.
This is the fretless version.
Made in China, light weight and simplicity of use without competition.
What's more, pass the shock of not having a body the instrument, it is well finished and everything is ergonomic.
SETTING THE Volume and Tone, and then basta. Mcaniques are the easel. Everything is done to keep his left hand free (the stick in his pocket, his nose ,...).
It is further necessary that it does not sound like a toy in Saint-Nicolas to unruly children.

The handle parat wider at nut of his head congnres all electric, but it is far from being a handicap this race for me better than my Jazz Bass (which I thought perfect). With the arches matrialisant body contours, Access in acute dj is easy, so imagine without ...
It PSE as a classical guitar and the neck is equilibrated with the rest of his body.
For sound: the SETTING THE Tone puts the craft the sound of a fretless bass that of a modern double bass, but how did they come?
Ds that plays the sound, we understand why: you should hear absolutely nothing more than a non-electric sector (or even less). But then a cavity in the body makes mini rsons and vibrate (like a Godin A4). And in the cavity 2 microphones SoloEtte (Made in America) capacitor that give you that sound could never reproduce but which rvait. And the fact!

Jazz, blues, rock, reggae, ... while he goes.
I would prfre far its low register (almost Tone 0) but you can also get a well funky playing on the same SETTING THE Tone.
I tried it with my SWR California Blonde: it is the perfect match. But I bought it by trying it on a Hartke (in principle I like much less) and the effect is exactly the same: we turn to see if it is self-m me coming out sound like an instrument that looks like so simple.

I did that for several weeks. The next step is to see if it holds up in concert. At least, I do not dmettrai shoulder under his weight. As long as it takes the distance scne is the business of the century. I'm curious to try his little sister fret.