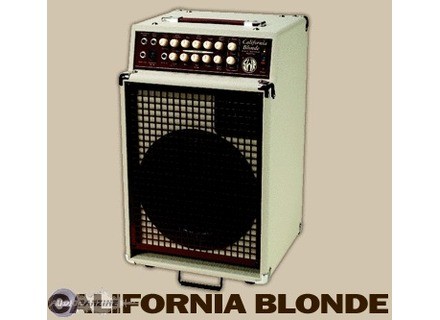 herrkapelmeister's review (This content has been automatically translated from French)" No, this is not a washing machine!"

SWR California Blonde
5
My opinion on its first version (Made in USA) this amp. Its current equivalent (California Blonde II) is still manufactured in Mexico and has some differences trimmings.
For my part, I would rate as the basis for electro-amp but it can amplify any stringed instrument with the same happiness.
It's a combo amp two separate channels, while transistor. It delivers 120W in a 12-inch speaker and a detachable tweeter (very handy if you want a good vintage sound). An additional output for a speaker is present at the rear and an XLR output to mixer and jacks for effects loop.
This is a reverb Hon. Trimming "Aural Enhancer" really has a huge effect on the definition of its product.

Most importantly, the sound is really clear with lots of attack and dynamic but never be aggressive as long as the instrument used is not a shovel infamous.
We must recognize that even when the amp has its own personality and is not a neutral such as EAR and I find his eyes closed recognizable.
To get an idea: Monte Montgomery used for virtually all his concerts.
It supports external effects, including distos other overdrives and even if it was not designed for that.
The manual is clear but the settings are not intuitive. It is well worth reading to avoid tweak.

Blues, folk, jazz, rock, ... suit him perfectly.
I prefer the warm sound (tweeter disconnected) it naturally.
I tried just about all my gear: guitars and bass electro-acoustic and electric dobros and other mandolins, bass and even microphones: everything goes with happiness.

I bought used 2 years ago after trying a Roland AC60, a Marshall amp and a few other AS100 for electroacoustic and I finally found my happiness.
If you want neutral, go your way (I use an EAR Classic when it is really necessary: bossa nova and classical music) but if you're not afraid of his personality: that happiness!
Only downside: weight 24 kg, despite its size. It's far from a EAR or a Markbass.
I do not know him no equivalent in other brands and it is rarely used.
Since I have, I understood why!