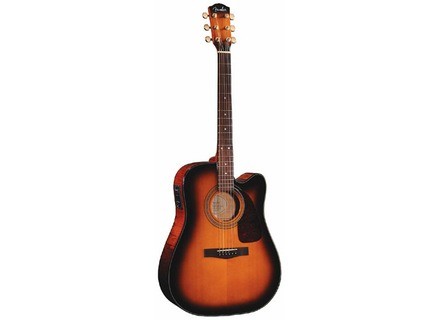 DG-22SCE, Acoustic-electric Folk/Western guitar from Fender in the DG series.

Fender DG-22SCE
5
I got this guitar at my local Guitar Center and paid around $500 with a hardshell case, a strap, and some extra stuff. I think I got the guitar itself for around $400 (around $50-100 less than the lowest price online).

The tone is great for a non-solid back and sides. It's a bright tone, and sounds great with the Elixir Nanowebs I put on them. The gold tuners add a nice touch to the guitar's already very nice look. I have it in Sunburst finish, which adds further to the personality of the guitar.

The action was crazy high when I bought this guitar, and in addition, once I lowered the action myself, there were two pretty deep slots in my saddle. This might have been the problem with the muffled sound when I first plugged it in. The gloss finish pisses me off...of course all gloss finishes do. Also, with hindsight, I would much rather have bought it without a pick-up, as Piezo pick-ups sound like crap if you play too hard.

The quality pretty much lives up to the Fender name. Fender isn't known for Acoustics, but it is known for quality. The solid Sitka Spruce top develops its tone more and more as you play it...it's one of those friends you'll have for a very long time.

This guitar is well worth the price, and I highly suggest it. It's a great guitar to start out with. However, I do wish the back and side were solid, and see how the tone would be.

thiervin's review (This content has been automatically translated from French)

Fender DG-22SCE
4
MODEL made in Korea. Good quality of finish for the price.

Channel trs enjoyable. I like my guitars rgler "the onions." For this I have 5 years or so, I never had any rglage again. I use, it is true, extra light strings, which must certainly play on that. Access in acute quite correct. Ergonmie a dreadnaugh (spelling not guaranteed) but then also quite correct, of course, not as nice as my PR 7 phiphone OS that corespond in thickness, the Yamaha APX SERIES. Weight ratio, lightweight or heavy or not at all Gnant anyway, and I'm not Balse ... Her trs crisatllin with new ropes, less bright when they have aged, it's logical. It lacks a bit of my body got in the low rev but it's nice for picking folk and it is doing not bad either. I put 8 because it is easy to play and not bad for a purchase price of the 3190 ball era (with 15% discount included c'tait nice)

It is well suited what I play may be the exception (but it's on because I do not fiddle too much out of habit pramp) style gypsy jazz: the sound is too clean if I m ' exprmer well. I play on a small amplifier Ibanez Troubadour 25 W (Good and cheap) is a scratching sound Questions versatile trs (Sf jazz I think I said) and that is REALLY easy and agr Able to play. A good first instrument and a scratch which is quite comfortable amplify (As long as you push too watts) because the prampli Fishman Classic 4 is of good quality. It is well varitoche, folk rock (CSN Style Young or Springsteen, Simon Garfunkel etc ...) No sound is zero and the only criticism one can make is that it lacks a bit of pure acoustic projection, despite a standard box. I put 8 because it is not the stew, not a martin or taylor either.

I IT CAN BE USED for 5 years. By scratching sound, I also have a PR 7 piphone purchase a yamaha steel string Silent SLG 100 dmontable (for holidays) (Excellent but a bit CHRE nine.) And a Takamine I EN 60 Nylon past fifteen years and which I changed by Franck HORSE Prampli part that sucks silent. (I live 25 terminals at home, by the way is a guy like a. .. (thumbs up)) Before buying the fender, I had a little Yamaha FG 480 I believe super mimi only sound I wanted a system that gold amplification. (The violin, the silent Yam trs good too but not better than the fender). Purchase price: I said earlier: about 3190 Frs 485 rduc with the seller. With the exprience I would do the same choice without knowing hsiter that have electro Whereas amliores (any brand) for 10 years.
Did you find this review helpful?yesno
»