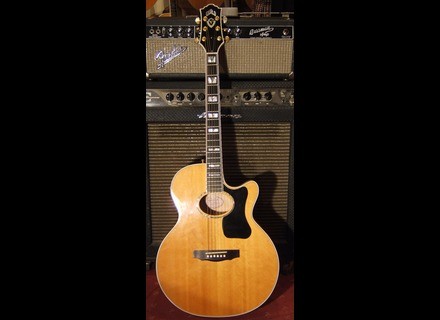 Guild F65CE
5
I purchased my guitar online for $1749.00 from Southpaw Guitars in Houston, TX(www.southpaw.net). Perhaps I paid too much, but lefty versions are scarce. I considered other makes, including Taylor, Martin, Larrivee, and Santa Cruz, but after playing them all, I couldn't shake the bright, vibrant sound of the Guild. Play it first, and then play the rest--you'll see what I mean. It's a sound that grabs you and never lets go.

Things to love: It has a AAA solid spruce top, 3-piece maple neck, ebony fingerboard and bridge, beautiful abalone and M.O.P. inlays, gold Grover tuners, and the superb Fishman onboard blender system: everything you'd expect from a top-drawer Guild. Its thinline Venetian cutaway body makes navigating the fast, narrow neck a joy. The whole package is finished off nicely by a unique oval-shaped soundhole and an arched maple back, which together provide more volume than you'd expect from a guitar this size. Overall, it has a smooth, bright unplugged sound that becomes absolutely gorgeous when plugged in. Truly a fingerpicker's dream!

Guild chose to inlay thin, white stripes on the fingerboard, and I think they interfere somewhat with an otherwise elegant look.

Moreover, I don't like that the arched back is made of laminated maple, but if it were hand-carved (a la Benedetto), it would be significantly more expensive, so I've learned to live with it.

Finally, I don't like that it won't be made any longer. Since Fender's Corona plant took over Guild production, the F65CE has mysteriously disappeared from its lineup.

Shame on you, Fender!

My guitar was shipped to Germany without incident. It arrived in absolutely perfect condition: no glue drips or finish imperfections, and all frets were beautifully dressed. Amazing. I even used a hand mirror to inspect her insides, but the more I probed, the more I smiled. Although it is a thin-line guitar, it is by no means a lightweight. Its maple, spruce, and ebony construction give it a substantial, solid feel--reassuring when you're gigging onstage. Its understated beauty makes the F65CE a guitar that always prompts questions from audience members between sets. Open with an unplugged number before plugging her in, and watch the jaws drop in amazement. Few can believe that so much sound comes from such a diminutive guitar. I never grow weary of it!

If you're on the market for a beautiful, reliable acoustic-electric guitar, then look no further than the Guild F65CE. It far surpasses, feature-by-feature, any other guitar in its class. Similarly appointed Martins or Taylors could easily cost twice as much. It is built to last, and I wouldn't hesitate to gig with this guitar without a backup. Also, its removal from Guild's current catalog will likely mean an increase in value over time, if that's important to you. Guitars like this don't come along very often, but when they do, they are worth seeking out. I cannot help smiling every time I pick it up, and it's probably the guitar I'd choose to be buried with. Enough said.

reflexo's review (This content has been automatically translated from French)

the handle easy freeway play the sound is perfect

I use it for 5 years I tried bcp models gibson martin taylor is quivalente the same price range it is a color of its particulire the brand. I love the bass and treble mdium own is very pleasant
Did you find this review helpful?yesno
»