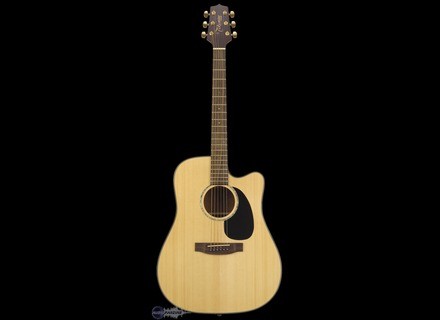 Takamine EG340SC
1
Bought 340 euros without trying sold 140 euros at the end of a month. A guitar that shames the Takamine brand.
Chinese manufacturing low quality
nonexistent fret
fast neck but poorly finished
not massive table writes that contrary to some, for this is the massive table 510.
good mechanical
action of ultra low strings (it borders all over the place)
to compel a carton to raise the bridge ...

I strongly advises against buying it.
The frets are so inesistantes there to do anything to it does not frieze.
I tried all the strings of ties, raise the bridge to do anything the high E and if frieze at the third fret.
The guitar is unplayable.
I think they wanted to ultra low frets for easier playing for beginners and it is true that to play 3 chords okay, but to play solo or small barred beyond the third box is disaster!
If the sound was good it would pass but the sound is just mediocre.

Not connect the sound is sweet and neutral but without particular dominant caratère.
Trendy, one realizes immediately mediocrity preamp:
- No power, the more the sound is deaf, can not hear the guitar in a mix. For the price, it really is a very low-end preamp!
The handle is unplayable, the electro sound worthy of a bad Stagg.
An instrument that I can not sell it to 140 euros

If you think like me buying a brand (Takamine) is a guarantee of quality, well you'll be really disappointed.
This guitar is a real SCAM to ridicule and finish his miserable. I no longer will buy anything on the net.
My Cort Earth 850 is ten times better and my parlor Landwood 100 times better.
What is immoral is that this guitar is for beginners who perhaps will not even aware of its flaws!
Takamine way flight.
If you plan to buy a scratching at 300 euros, turn to Lag or Yamaha or Cort!
Did you find this review helpful?yesno
»

Takamine EG340SC
4
15/08/2012:
See the information above. Despite a systematic disconnect the jack from the moment I would not use it, the battery consumption has always seemed too large.
7/10

15/08/2012:
Instrument comfortable to play, nice handle, grip the tuning, easy access to treble because of the cutaway, but it is not an instrument of shredder (I'm not, anyway).
In the long run, and it is inherent in this type of guitars and this format, the right arm fatigue on the upper edge of box, because the body is very thick.
The integrated equalizer can perfectly calibrate the color we want to give sound to the instrument when it is amplified. The problem is also sound, and I come back right after.
8/10

15/08/2012:
Plugged into an amp, the sound is easy to shape in terms of equilibrium between the frequencies (the quality of integrated preamp + all you can still carve on the amp itself).
Unplugged, the guitar has a balanced natural sound, what sound projection but damn! Too many sound projection, restoring difficult nuances and dynamics that fencing is to put in his game
This is also why I sold.
Choose an instrument such as this one, it is to access multiple musical identities depending on whether or recorded amplified acoustic sound. In the latter case, I've never been able to take anything from this guitar. Its volume and huge projection made me pull my hair out every time I put in a position to check me via microphone.
Before you go bald, I put it on Ebay, and it is the joyous hours of a guy who did not seek to register, but just wanted to play at home and around campfires. There he had reason to be filled.
MA in recording setup, unfortunately she scoops a 5/10 which does not do justice to the quality and sound of violin.

15/08/2012:
I sold after 18 months of use, which spent the last 3 to battle to try to capture the natural acoustic sound it issued, in vain.
All the more pity that when I tried it in store, I compared it to three other more expensive it all to me confirming that the intrinsic qualities of a guitar are not necessarily proportional to the price charged.
It was the smoothest, most balanced, the one who sang the loudest (you surprise me!) With a je ne sais quoi in the sound that set her apart from the rest ... a particular kind of sound identity, much like an Ovation is recognized as soon as we hear the first chords of friction. In short, it did not offer anything and had a great quality / price ratio.
But the store is nice. The truth, she is at home (that, it will still friends), but especially in front of the home studio microphones. And this is where it was spoiled. I tried everything to capture his voice, but I always struggled with this volume and this projection that made all the attacks were widespread before the sound itself returns to acceptable standards for my VU meters. Lighten the blows of mediator, it amounted to no longer receive the shock cords without enjoying the sound quality of the instrument. In short, square the circle, and no nuance possible .. An acoustic / OFF, somehow.
I let out a little as you leave a mistress with a dog character who would have missed nothing to be an extraordinary woman ... to regret, but knowingly, to end the frustration and dissatisfaction.
So I can not kill my mistress, and I left a 7/10 on all of its services.

I play pop, folk and pop and it Franaise nickel
it is powerful and is also good for rock
cheek direct the sound system eta rings of hell
Both its crystalline and deep (hot)
I tried takamine more expensive (1100 euros) and that sounds really less!
I like it because it has a drum that vibrates too much

I just bought it but I tried several before and she really Takamine sound and amplifies it's rve! (Slightly stained and the color I like)
I love everything about this guitar
very very good report quality price, I was very impressed by its sound when I tried it!
I also tried the more expensive ibanez (his mtallique) I do not like
and yamaha and valley blues and a Canadian cedar, but I prefer by far the takamine
I would do on this choice, you can rush to buy it with closed eyes, it sounds like a great but it is cheaper! zicos words!

Roberto SongPop's review (This content has been automatically translated from French)

It is true that dpart the factory are rglages dcourageants ...
But try (with prcaution, when changing the strings for example) to remove the two plastic spacers caramel color, located under the bridge saddle and under the capeur. Then, climb ropes Martin Bronze Acoustic SP CUSTOM LIGHT 011/052 (Ref. 80/20) and l. ..

has changed everything and it's wonderful! Easy games dconcertante (a frieze some but worth it) in rhythm for hours without fatigue, and the sound is always the! Voil is my exprience on this guitar has an excellent price quality ratio.

Did you find this review helpful?yesno
»
Read the 6 user reviews on the Takamine EG340SC »