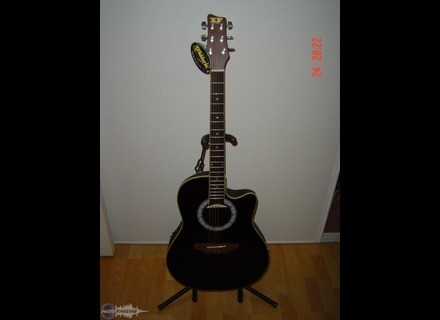 
Plastic back. Mine is in perfect condition but I saw some blistered ones at a store! (as if they had pox!). So watch out when you pick one.

It comes with a truss rod key.

The machine heads are very bad and the guitar doesn't stay in tune.

I immediately noticed that the string action is too high, making the guitar difficult and tiresome to play. I don't recommend it to a beginner because he will be disheartened really fast.

I play it with a capo (I'm lucky because my singer has a very high voice) to shorten the neck and get a lower string action.

I also adjusted the truss rod and the action is lower (but the neck is now convex).

As already mentioned below, avoid playing it while standing. I added a strap pin to the neck heel and it's better now.

The neck is slim, access to the upper frets is good.

Played unplugged, the guitar sounds good (although the output level is not very high). The plugged sound is also good.

The EQ is quite effective but it soaks a lot of battery power even when the guitar is not plugged.

I give it 8/10 because of the good value for money.

I bought it as an additional guitar (I play a Fender Telecaster and a Gibson The Paul with a Marshall amp) to play acoustic songs and play along with my friends on summer evenings.

Don't buy it if you're looking for a guitar to learn how to play! You'll cry with the first bar chords!

But I wouldn't play a 15-song set list with it!

Update: I will try to find a better acoustic guitar because this one is really awful to play

So, if you want a nice-looking instrument as eye catcher in your bedroom, it's a cheap solution. But if you are serious about playing the guitar, forget about it and look at Cort, Lag or Yamaha models.
Did you find this review helpful?yesno
»

Xp AG450
5
Manufactured in Korea under license Ovation (and yes they ratchet patent) in the same factory as the Ovation Applause who score 400 euros (I bought mine 180 euros Cygnus) I had a test Ovation 300 euros OCCAZ but also Xp it is scabies and prampli Superior finish.

Irreproachable workmanship, better than my Takamine!

Handle end and fast guitar pluttlgre, access to acute is a breeze. the action is low rgl by me thus making barrs easily. The guitar does not frieze, the frets are well finished.
RAS, the price-quality ratio is incredible!
Note that it ended much better than my 340 Takamine Eg I pay 380 euros and frieze as hell because of bad quality frets.
On xp, you can play solo until the Last box without problem ...

The sound is already full acoustic Russianness then a branch once what a slap! It's round and deep with great warmth and crystalline highs. Objectively, it is better than Ovation Applause 450 euros which in any fawn out of the same factory ...
Compared my Takamine, Xp is ten times better. And yes, you do not pay the brand ... The sound is better dfini, critallin more and more powerful. In short sonority much more frank!

ToBee's review (This content has been automatically translated from French)

Xp AG450
5
Probably made in Korea;
20 frets, a micro pizo under the bridge (with the indoor of the case);
3-band graphic equalizer EQ-505 with a volume knob;
Channel stocky, rosewood fingerboard, Saddle flam table.

The handle is not very fast, does not slide too, but is thin enough, it was a comfort to play if the action of the strings is not too high.
The agus is easy thanks to the cutaway ACCS.

Thanks to the 3-band equalizer can be approached a variety of sounds, the guitar is versatile trs! ca n'gale not a good sound of applause: the bass and are very low mdiums Submitted.
rgler can not shine on this guitar bad, because my taste there too.
Mdiator an attack with a little boost in the treble when the guitar is plugged into the mixer can break down all the hair of your cat at once!
In gnral: beware of Feedback ...
No branch, the guitar sounds great, the sound mdiator heavy mtallique in arpges a well rounded and deep.

I use the guitar for a year and wheelbarrows, I enmene everywhere!
By car, train, plane, the beach, at the stage at the Feast of mankind, has all my accessories ... She always made me honor!
A cord of pte in one year, and yet I scratch hard ...
There's no saying it's solid, good performance agreements, comfort MODR BMOL one: the shape of the body TRS realize that difficult the game up. But what style!
A report quality cost effective price for a good beginners guitar, travel or lugging around. what the price was not afraid of breaking, and all fawn, it's solid!

sound-hunter's review (This content has been automatically translated from French)

Same as above
I must reinforce the fact that the guitar is played very badly standing. I've had a year and I intend to play instruments for the part of a play, we'll see if it will go. It tends to drag quad is played standing up. It inconfoertable.

It is true that the sound is very good. I use string acoustic Martin.

It's a good guitar for beginners. It is to take it everywhere. But this is not an Ovation.
Did you find this review helpful?yesno
»
Read the 5 user reviews on the Xp AG450 »