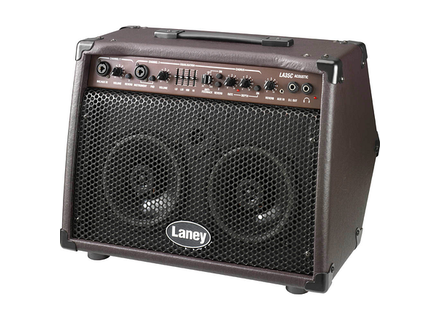 LA35C, Acoustic-Electric Guitar Amplifier from Laney in the LA series.

Laney LA35C
4
I bought it to complement a cheap rig for a few gigs as a guitar/voice duet. I’ve used it with a Cort AF510E and had the opportunity to hear a martin junior and a seagull played on it during gigs where we shared gears.

That’s an honest amp which can be compared to Marshall’s 50W acoustic model, but it’s more practical as it can be tilted, allowing to use it as a stage monitor when the venue has its own sound system. The sound is transparent, you get what you give. Perhaps with less lows at a high level compared with the 60W model, but the sound is true to the guitar. The sound volume is enough for playing in a bar with a 15-20 attendance, beyond it tends to be limites (but in such situations there’s often a sound system).

Regarding its effects, the spring reverb is not bad and suits both the guitar and vocals. Sadly it only offers a common setting, which can be inadequate if you don’t have an external vocal preamp. The anti-feedback feature does the job, nothing particular to say about it (except how practical it is). The chorus would have used a footswitch, as it sounds good but you have to switch it on or off on the amp, which can be a problem. The EQ is rather noisy, with a bachground noise that can be heard as soon as you turn it on when you don’t play (not really disturbing, but unpleasant when you’re in the amp’s axis, while less perceptible when you move away). However, it’s not a problem when playing.
The DI does the job with no background noise. I only add a compressor before it to make the sound thicker and it works wonder.

In the end, it’s a cheap amp that sounds transparent (both for the guitar and voice), and nice to play small venues or as a stage monitor on bigger ones. Perhaps not the most adequate choice for a beginner as it’s rather powerful, but in the end, for such a price, if you can move mountains you can move molehills

PS : I just wanted to mention that the amp has no master volume, so the voice and guitar volumes are used as gain settings for the preamp that sends the signal into the power amp which default level will be full-on. It’s nice to know, as this induces a small background noise even at a very low volume, but the noise won’t turn up with the volume. It may also be the cause for the EQ’s background noise (short version is, you have the noise of a similar amp that would be maxed without being able to lower the master volume to reduce the noise). For such a price, nothing too horrible.

A demo of the amp used with a Cort AF510E is available here (no other effect, only compression, the rest such as the reverb comes from the guitar and amp, flat EQ setting and signal through the line out):