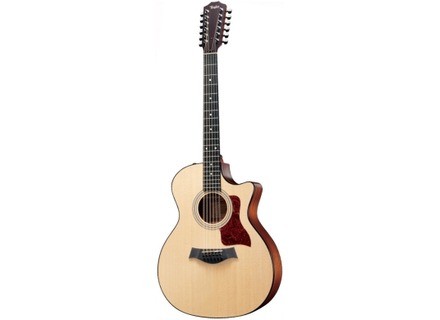 354ce, Acoustic-electric resonator guitar from Taylor in the 300 series.

Primarily a singer, I've been playing guitar for about 10 years, been in a band (drummer!), and have continued to record and play with other musicians on a non-professional basis. My styles range from folk to hard rock, with heavy power-pop leanings -- Big Star, not Green Day.

I bought this guitar from Musician's Friend with a 10 per cent off coupon, bringing the price to about $1600.

Taylors are known for their 12-string acoustic sounds (Chris DeGarmo of Queensryche played one for his MTV Unplugged session in the '90s) and the 354CE doesn't disappoint. I've always had trouble finding a truly great 12-string acoustic guitar. I've owned Yamaha, Ovation and Takamine 12-strings, and all of them have something wrong with them: The Yamaha's frets wore out after only about a year; the Ovation's neck was massive, and its string spacing was far too wide, making it tiring to play; the Takamine jumbo's string tension was very high and the jumbo body made it unwieldy especially if you're playing standing up. I further auditioned Breedloves, Martins, Seagulls, Rainsongs and Ibanezes, and none of them had the right feel or sound. The Breedlove didn't have enough projection; the Martin sounded and felt good, but had a too-wide neck, no cutaway and no pickup; the Seagull and Ibanez didn't have enough top-end sparkle; and the Rainsong didn't sound good acoustically.

The Taylor 354CE is the closest I've seen to the ideal feel and sound I was looking for. The string spacing (such an important thing on a 12-string) is perfect, the neck is large but shallow enough for easier fretting, the Grand Auditorium shape fits my posture perfectly, and the Expression System works well for live amplification. It has the signature bright, almost mandolin-like Taylor sound, but isn't as harsh or synthetic as an Ovation 12-string.

Compared to my 314CE, the 6-string version, the 354CE's electronics sound a *lot* quieter for some reason. I tried switching to the 12-string in a set, and the volume discrepancy was quite substantial, forcing a lot of knob twiddling to get the sound back up. The balance of the guitar is neck-heavy; the solid weight of the neck is reassuring for handling the incredible string tension on a steel-string 12-string acoustic, but the balance problem is still there, a nagging issue. Otherwise, the 354CE pretty much meets all of my expectations.

Excellent. This 354CE doesn't have the cosmetic flaw on the top as on my 314CE, and the construction and looks radiate class.

I've been very picky with my hunt for a 12-string acoustic guitar, a quest that's gone back about nine years now. This 354CE is not quite perfect for my ideal, but it comes the closest.