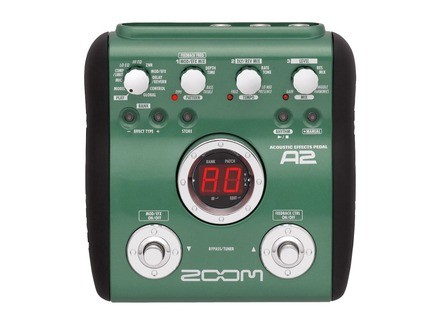 A2, Multi-Effect for Acoustic Guitar from Zoom in the A series.

Product replaced by the Zoom A3.

Zoom A2
5
The product is a multi-fx stomp box--replacing the old 504 unit in the product line-up. it has a footprint of about 9" x 9". It has four rotary knobs, 5 solenoid (soft-touch) buttons and two heavy contact foot switches for scrolling between patches.
The construction appears to be some type of anodized aluminum with a green finish.
I have been playing guitar for almost forty years. While I gigged some in my high school and college days 30-35 years ago, since then my playing has been more limited to special music at church and musical programs in nursing homes.

I purchased this from Sweetwater Sound to replace a Digitech multi-FX unit I was less than pleased with. I paid $100 for it. In shopping, I compared it with previous units I had owned from DigiTech, Alesis, and DOD. I also field compared it to similar units from Line 6, Behringer, and Boss.

First off, this unit is very easy to use in terms of editing and storing user patches. As with any Multi-FX unit, you will have to have some idea of what sounds you want to have stored. All in all, I had created 20 user-edited patches in about an hour.
A second major plus is that this unit has the capability of 6-band EQ. The best the other manufacturers can offer in this price range is 4-band EQ.
The sound is virtually noise-free. While it comes with a Noise reduction component, I have not noticed as much noise compared to Alesis and DigiTech units, which produce a lot of hiss.
The unit can be powered by either battery (4-AA cells) or AC. By using rechargeable L-Ion batteries, there is no need to be tied to a wall wart with the wimpy spaghetti cord again.
Finally, Zoom builds their units with an on/off switch--something only Boss does.

The negatives on this are relatively minor:
The first negative is that it has a single 1/4" TRS (stereo) output -- dual (L/R) 1/4" TS outputs would be better.
A second negative is that Zoom arranged the FX so that the reverse delay and tape echo FX are located in the Modulation FX cluster with phaser, flanger, chorus and tremolo instead of being located with the delay/reverb cluster. It would be better to move reverse delay and echo functions to the delay/reverb cluster so that they can be used in conjunction with the phase/flange/chorus FX (for some of those Beatlesque mid-60s psychedelic FX)

The construction appears to be very sturdy.
Except for the battery compartment cover, the top, back and bottom appear to be made of some type of anodized metal (probably aluminum. The sides appear to have some sort of rubberized coating on them.
The knobs for adjusting the settings/parameters are very sturdy as well.
The 1/4" inputs and outputs are anchored to the casing with reinforcing collars instead of being anchored internally to the circuit board.
The footswitches are heavy contact switches (like on MXR stomp boxes).

This has many other features I didn't examine because I don't use them--such as acoustic guitar modeling (11 different models). For what it offers that I do use, it was worth cost.

Zoom A2
2
Purchased repair following a breakdown of gear for a dozen dates pending the repair of my preamp.
Used 1 (one) night.

Finally, after consulting the manual it is not complicated and even I have to say that logic is pretty well done compared to other much more expensive gadgets.

Where the bottom really hurt with this stuff is really quality. Manufacturing and especially sound ....

Start with what interests us at the highest point simulations microphones.
Well it's just a joke. I can not describe the record: it means to understand. That sucks, unworkable. Besides, I think this is a scam pure and simple: no emulation algorithm in there but just pre-designed EQ associated with a pre-delay for distance "micro" and a slight compression is meant too.

Reverbs, chorus and other modulation effects and space are cold and metal artifacts and especially to hear it all the time. Looks like 8 bits miscoded colder!
The delay is the only effect to pull out of the game
When the compression I not speak ....

All effects - falsely - by-passed one might expect a good sound DI: Well not the same without using the gear you still rots the signal. it returns low flat, cold mediums and especially hyper-aggressive and full of false harmonics acute, short, horror.
Without exaggerating, really: I know that it's not expensive but why sell unusable??

Preamp and converto at the lowest posssible limit: my guitar live console without DI and despite the impedance problems, sounded better!

Sleeping in a closet since the only concert I've used. I finally opted for simple DI waiting to get my Aura.

The value for money is just Cheap, not good.

A multi-purpose introduction to the limit ...

Understand that if I spend time to write this negative opinion it is not for the sake of breaking the low end but to avoid beginners penniless an unnecessary expense.
Few weeks of savings will be much more productive to afford real stuff.

jocluc's review (This content has been automatically translated from French)

Zoom A2
5
47 types of effects:
- 11 models of the most famous guitars + 1 pre amp tube
- A microphone positioned in different parts of the guitar
- A compressor and a limiter
- 2 low-frequency equalization
- 2 EQ High Frequency
- A noise reduction
- 14 effects (chorus, delay, phaser, flanger ....)
- 13 delay effects and reverb
- A small drum machine
- 1 tuner

I 8 but because the effects can not be edited

-Configuration is quite simple I've had two days, I've never touched a pedal before and it works anyway, it sounds easy

I'm not a pro, so try the beast I recommend it, however I find really nice effects all its not only useful for a sound but you get to this vraimment laughed it changes the sound of the guitar for some in well with moderation but bad if you have any background, normal

- I use it for 2 days so I will update this opinion
- I was looking for a cheap pedal with his right to make me happy on the bits that I again
- Value for money is great (99 euro)
- For a beginner like me who wants this to please 'for cheap I suggest
- YES I would do this choice
Did you find this review helpful?yesno
»

Tin-Man's review (This content has been automatically translated from French)

Zoom A2
5
Available in effect, there are the traditional chorus, flanger, delay, reverb ....
It's all digital, with .... I do not know, something to the inside .... Anyway it seems to have everything plugged into the lamp .....

My colleague who gives his opinion below, note that the effects are not edited, well then I'm not quite agree. Can we say they are editable from the time where you can touch the parameters? If so, then they are editable. It can also edit and save its own chaining effects, with their attendance and action.

It's a pedal, so editing is intuitive and fast, everything is done to the ear ... we not spend his time to watch the screen as it comes down to a display quartz watch .. . perso ca does not bother me, however, it learns to work with its leaves, it's not bad.

The config is simple and generally well thought out.

For editing sounds, the manual is, in my opinion, mandatory. Except for the large pro who has a habit of fiddling with buttons, full of English words ....
For the newbie pretending that I'm editing a sound on an electronic machine, the tattoo on my forearm manual is mandatory ....

I think the effects over the top.
I'm using this "pedal" with a Takamine EF508C. This is the lens, the Péchu, the soft .... you do what you want with, even sounds that come out of the register branque guitar ...

There is an emulation of models among 15ene + big guitars. There is happiness.
You can listen qq examples here: https://www.zoom.co.jp/english/download/demosound/demo_a2series.php
The drum pattern is a more integrated that can work more fun compared to a ticking metronome.

I use the Bouzin for 1 week.

Not only I would do this but I choose not afford it during the G2 is the twin brother of A2 but for the electric guitar.
Less than 100 euros and you guys sound models of the fire god ....

My choice is made!
Did you find this review helpful?yesno
»
Read the 14 user reviews on the Zoom A2 »

Listen to the 6 audio files about Zoom A2 »

Zoom A2 manuals and other files

Other Zoom multi-Effects for Acoustic Guitar