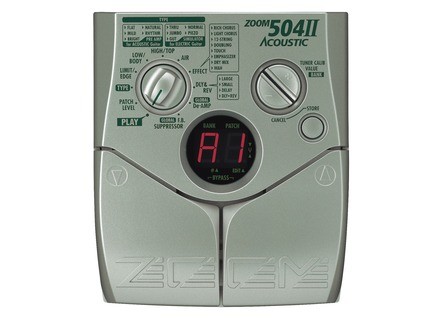 Zoom 504II Acoustic
5
I got this unit as a Christmas present that I had askef for. I think my parents got it at a Daddy's Junky Music store for about $80. If you bought it online, shipping would make it about the same price.

I enjoy everything about this unit. I play a Seagull M6 Spruce that i have been extremely happy with. I like to fool around with some Tim Reynolds stuff and this unit combines the delay that Tim uses with a whole bunch of other effects including the 12 string guitar effect, reverb, and chorus along with many more. Everything sounds great.

It seems real durable. Since its so small, it doesnt take up much room. Thefefore, its less apt to get damaged.

A very very nice unit for the money. Combines many effects into one package. I was debating between the Boss DD3 or this Zoom 504 II acoustic. And i'm glad i chose this!

Zoom 504II Acoustic
5
I've purchased this fine acoustic simulator from Nakas Musicland, Athens, and I use them regularly when needed.

This 504II effector had some good effects because it emulates many of the "acoustic"-type sounds from much many acoustic-guitar manufacturers, like i.e. CF Martin, Gibson, Takamine, Alvarez, Guild, Yamaha and Gretsch. When you switch to the "thru" mode and select the 12-string effect, while playing electric guitar, you got instantly a chiming Rickenbacker 12-string sound: this jangling combination of Beatle and Byrds tones comes through, especially when using a Strat, Tele or Les Paul. By adding some juicy reverb, the 12-string effect also act as a flanger: Strat players would appreciate this notorious sound config, when using both bridge and middle pickups (by switching the pickup selector to the 2nd position), the fact that Dave Gilmour used the flanger effect while playing the "Shine on you crazy diamond" intro with his candy apple red finish '57 Strat, who features three EMG active single-coils with a powerful 25dB active SPC mid-boost circuit.

None, of course! The 504II has the nicest features of the original 504, but with some new attractive additions, such as the EMPHASIZER and WAH effects and lots of tonal variations.

Excellent quality and construction, the new 504II was more stylish than the original 504 acoustic effector, because he came in a new, sleek silver box, while the original features the classic black box of the Zoom 500-I range of guitar and bass effects.

American Deluxe Tele and Mexican Deluxe Nashville Tele owners take note: if you don't have installed a Fishman PowerBridge on your favorite guitar yet, then you can use your Fender Telecaster with the 504II acoustic simulator and get in your hands the nice acoustic features of an American or Mexican Power Tele, because the 504II offers both twangy Tele spank and shimmering acoustic sounds.

Zoom 504II Acoustic
4
I aquired this unit at a local music store and I bought it for my wife for her birthday. Looking back I wished I would have bought it off the net for much cheaper. I bought the unit for 153.00 (including tax), but I could've bought it from American Music Supply for 69.00. I don't know why I didn't...I buy all my other music gear online.

I like the Zoom 504 acoustic because you get a good number of effects in a small package. Now I must confess I'm not the guitar player; my wife is; but from what I've heard, I've been real impressed with the sounds that unit can produce. I like the chorus sounds and the wah sound isn't that bad either. Now if you are looking for a good heavy medal distortion, this isn't the unit for you. This is a product designed for an acoustic guitar or to make an electric sound like an acoustic. The distortion sound they do have on there though sounds great with an acoustic. I like the edge it gives it. It gives it a Darrel Evans feel (good guitarist by the way).

The main problem I have with this unit is its casing, but that's one of the reasons why you can get it cheap. The Zoom 504 acoustic has a plastic casing and thus doesn't make it very road durable...however, I have been extremely impressed how durable it has been so far, even though I still wished they would have put a medal casing on it. Other than that I think it's a great unit.

The Zoom 504 acoustic has a grey plastic casing and has two pedals. Both pedals are used for scrolling through the all 36 of its sounds. It also has a dial on the top left hand side of the unit where you can change different settings on your sounds. For the price you are getting a very good piece of equipment.

If you are looking for a pedal to give you a variety of good sounds without breaking the bank, the Zoom 504 II acoustic is for you. If you play for fun or play for a living, this pedal will definately satify any acoustic guitar player looking for some sound variety in his/her playing.

Sphinx's review (This content has been automatically translated from French)" To begin with, but not anymore!"

Zoom 504II Acoustic
2
I'm not going to dwell on the characteristics of the device, already addressed by other assessments.

The setup is very simple patches, always in the absolute.

The sounds are clearly not up to par, and it is difficult to get a good sound.

I played for two years in band rehearsal with this pedal, and she did not believe in this context: the sounds do not go well in the mix.

The pure sound of the guitar is very degraded, and you do not use this pedal for that still have some effects sometimes indispensable.

It can be a first choice to start in training alone, for a limited budget, but nothing more!

Well, there is probably more than in the opportunity, too ...

Did you find this review helpful?yesno
»
Read the 7 user reviews on the Zoom 504II Acoustic »

Other Zoom multi-Effects for Acoustic Guitar