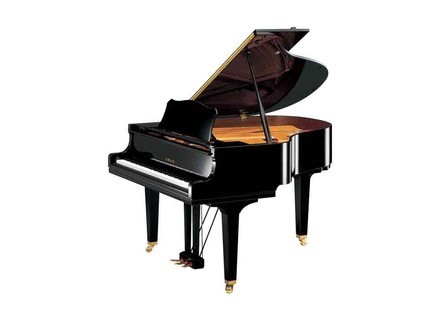 Yamaha G2
5
The Yamaha G2 is an acoustic grand piano with a big sound and great overall feel. My experience with the G2 is in the recording studio only. I was the engineer on the session and not the player, although I did get to try playing the piano for a bit. In the studio where we recorded with the G2, we also had an upright piano to work with, but the G2 is where we would go to get our clean, full, more traditional sounding piano tracks. I used a pair of Cole 4038 ribbon microphones to record the piano, and the result was nothing less than outstanding. For those who have used the 4038's, you know that they have an extremely warm sound, but also are very clean sounding for ribbon microphones. I might have used something different on the G2, but I felt that for this session the Coles worked very well. As far as the sound of the G2 is concerned, it's extremely impressive overall. It might not be as traditionally bright sounding as some of Yamaha's other pianos, but instead it has a full bodied sound that is overall very well rounded. Yamaha is definitely a company that I always trust when it comes to pianos, as they got their start making pianos and organs before they were the world's largest musical instrument manufacturer. The price of the Yamaha G2 is definitely reasonable for a piano like this, as you'll certainly be paying a good amount more for a piano of this quality from another brand. There aren't many flaws at all with the G2, so I'd have to say that I wholeheartedly recommend using it if you can, or checking it out for purchase if you're in the market for a grand piano like this one.

Yamaha G2
4
On it I learned to play, and I still have today. I learned on upright pianos and grand (Pleyel mostly) at the conservatory. I also now a Steinway 3 / 4 tail early 1900 but I do not know the reference (this is my father who bought a concert hall).

So my advice would be done against all those I have played or still play (without comparing it to upright pianos either).

At the touch, it's straightforward, no depreciation, no softness in the keys, which can be useful for a game rock, but makes a bit more difficult game fine nuances, but it is not rédibitoire.

The sound is in the same spirit: We are not at all in the warm sound full of harmonics of Pleyel Steinway or that I knew. It is clear, sharp, or roundness little chorus effect, a hair metal (I'm exaggerating here but compared to others ...) but suddenly the agreement do well, even in the grave. The sound is again pretty rock and why not jazz, far from classic anyway. If you listen to "Live in Australia" by Elton John, you will find a piano sound pretty close example.

Quality level for 30 years that I have, there is only deplore the anchor point of the stand that holds the hood open, the wood crumbled. Otherwise, RAS. This piano is very little out of tune too. Moved 2 times for 8 years (without tuning during these 8 years), it has lost about 1 / 2 ton, spread relatively evenly over the keyboard (which I was not prompted to do so given).

Aesthetically, I am white. Beautiful object, with no frills. I'll post a photo opportunity.

The short conclusion: Reliable, precise sound, its pretty cold, preferred to modern music (which does not stop me from doing my classic over the first 10 years of piano).

I put 8 in the notes, because its kind (sound) is good, but we just love that sound!