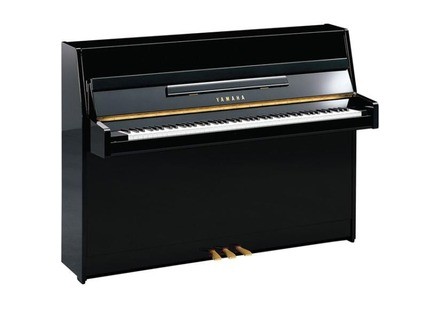 b1, Acoustic Piano from Yamaha.

I tried a lot of piano, including all the Yamaha range, but also a lot of good piano concert or rights.

I like the compact and modern design unlike that of the U range with a straight trunk and feet on the sides of the keyboard. I do not like the sound.

I would do this choice.
Did you find this review helpful?yesno
»

Yamaha b1
4
I studied for 15 years on a Yamaha U3. After some time with a very nice Samick (in the style of B1), then another low-end piano whose name I forget, I took a clavinova to play at any time until no longer support its touch. That's when I took the B1 to enjoy both the feel and sound to the headphones.

I tried all the pianos available Store silent and by far the only system that is seriously Yamaha. I speak of the relationship between the action buttons and strength of the sound heard is excellent, as only Yamaha know how to do (I also think their stage pianos).
I also tried the Yamaha Silent range U, I know the touch. The feel of the U is better in the sense that it makes the game easier but equally after train on a piano so good to feel at ease when playing in public on a better piano. The sound was the same in both ranges at the time (now I do not know). U are more expensive and less like their look.

I like the compact style, modern and free up my B1. The silent system is extraordinary: it is really that of a large (in size) concert grand piano with very clear treble, powerful bass and even a bit too, mediums measured.
I do not like the acoustic sound: even given it sounds like a pot and there are too many mediums. I regret the total lack of connectivity for MIDI and I was willing to pay for this option.

I do not agree with someone who told me that the hammers that moved in a vacuum (without typing the string) does not simulate a game. For me it is obvious that when the hammer is running everything is played, and that touch is the same and very good - much as that of B1 can be - as in silent acoustics.

Yamaha pianos are expensive but I see no serious alternative to their system silent. I would do this choice.

Yamaha b1
4
I bought this piano there is a little over a year to get back to serious (I took lessons as a teenager and then I turned to the only synths). Among the few models I tested around this budget (2800 € nine) was really the best. I still can not believe that this is the first model in Yamaha's range.

Properly installed (room acoustics) and well-tuned (very important), it sounds really clear and sweet, with a resonance necessarily limited by its size but still quite flattering, in my ear. The severe lack a bit of safe and heat compared to a B3 for example (in the same range but with more generous dimensions). They, however, a certain roundness quite nice, especially for a piano so modest. The highs are very clear, probably too much on the last octave where they lack consistency. The mids are very nice. Overall, when the piano is properly tuned I find it very pleasing to the ear, a great clarity, not aggressive and with a little resonance very flattering. But when he begins to tune it is not at all the same and quickly becomes tiresome. That is my only reservation: for now it does not agree very long, but the technician told me it was normal for a new piano and it would stabilize over time. I hope he's right.

Finally, I find the feel very comfortable and sufficiently nuanced (I have an intermediate level). Again, it can be modified significantly by a proper setting.