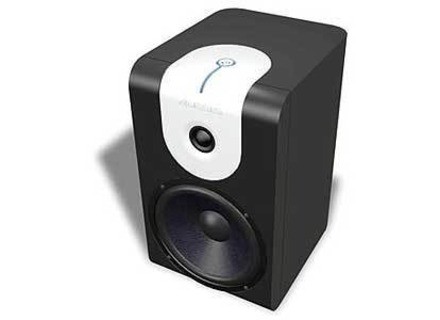 M1Active 520, Active Monitor from Alesis in the M1 series.

Alesis M1Active 520
4
I bought the Alesis M! Active 520 monitors because I needed some small, reasonably priced monitors for my studio. I have to say that I am quite impressed. Lows are tight and focused, with plenty of detail in the mids and highs. What is really nice is that they can be set up for different listening environments via the switches on the back that allow you to tailor the frequency response to suit your needs. No doubt these aren't the smoothest or most detailed monitors in the world, but I have done a lot of mixing on them and the results have held up very well when listening to those mixes on other systems ie. boombox, car stereo, TV speakers, other reference monitors etc. In other words, they do what they are supposed to.

Sounds pretty good, great stereo image and you can also put them next to your screen without worrying about anything being damaged. They have great low response and are pretty accurate. They don’t provide a lot of boom though, but you don’t want a lot of boom when you are mixing on them, you want a nice accurate clear sound.

Overall, When I received them I still thought man these little speakers are not going to do anything. Hooked them up and man I was surprised at the sound quality and clarity I was getting from them. They are very flexible to because you can cut the bass, mids, or highs and change the acoustics of the room. They are great monitor for the price and will help you get use to mixing music. I recommend them to anyone who is looking for a good set of monitors that will sound good and give above average flexibility. Once my studio gets bulit I will still use these along with my JBL LSP4300 series.

Alesis M1Active 520
5
I was wanting some active monitors for mixing/mastering with for my own production needs, I was using headphones to mix to but friends and other producers told me that I should seriously consider getting some monitors.
I looked around for a while to find some that were in my price range and these were it.
They come as a pair for under £200 which is great I must say for how they sound. I think that with monitors though, the more you spend the better you are going to get. For example, at the studio I have a pair of genlecs that cost a lot of money but they definitely sound a lot better than these I have at home.
I do have a sub woofer hooked up as well since the bass response is good but not good enough to pick up sub bass. I produce a lot of dnb and dubstep at home which makes me need a sub for the low end frequencies, these monitors have good bass but definitely not great for mixing sub bass to.
They have 2 choices of input. TRS or XLR, I am using balanced TRS jacks at the moment with my soundcard which is an m-audio fast track pro.

I must say that the sound is great, stereo image is spot on and you can put them wherever you want.
What I mean by this is that they have acoustic space options at the back which allow you to put them in a corner of your room without it being too bassy this is great for home studio set ups that do not have a lot of room to properly position everything in. This option is definitely one of the reasons why I bought these monitors.
Everything sounds realistic but compared to high end genlecs these lack a little in sound.
The frequency response is good, I still use a sub woofer though to mix sub bass whilst producing.
They are pretty small monitors so I would not recommend them for pro studio environments, I personally like wider speakers in the main studio as I feel they sound even better.

The things I like most about them is the sound that you get, I think that for the price I paid for these monitors they are really good value.
I like the size of them but I would go bigger if I could. They colour is a very nice finish I must admit and they also have a blue light that shows that they are on and it flickers red if the speaker is distorting which I think is very handy but they have not done that with me before, I just know this because of the manual.
I have used a lot of monitors before buying these, all the ones I have used though are for recording studios which are really high end monitors that these would not beat.
If I had more money I would definitely buy some different more expensive monitors but for now I will stick with these definitely.
Did you find this review helpful?yesno
»

Alesis M1Active 520
5
The Alesis M1 Active 520s are a set of active near field studio monitors. They boast 75 watts of active power, and don't require any sort of outside power amplifier since they are indeed active. These are perfect for home studio owners for a variety of reasons that I will talk about throughout this review. They are suitable for all sorts of applications in a home studio environment, but I don't know if they would be suitable for use in professional studios - at least not for mixing or mastering.

For a smaller pair of near field monitors, the Alesis M1 Active 520s pack a good amount of punch. They are definitely capable of getting quite loud, without being overly large or anything like that. It has tuning in the back of it, which is nice especially considering that most home studios are not usually in the best situations acoustically. The overall sound of the M1 Active 520s is full and definitley covers the full range of frequency, with a surprising amount of low end response as well. While these wouldn't be the most ideal mixing monitors when speaking on a higher level, they would be fine for smaller home studios.

The Alesis M1 Active 520s definitely seem to be some of the best bang for your buck when you are looking in the world of home studio monitors. While these might not be on par for professional studio owners to mix on, if you're looking something for your smaller home studio, these will be a perfect fit most of the time. They're perfect for those home studios that are just getting started. I'd recommend doing a shoot out at a store if possible if you're looking on choosing your first pair of monitors. Definitely don't leave these out of the equation as these are definitely some of the monitors in this price range.
Did you find this review helpful?yesno
»

Urk Boombleep's review (This content has been automatically translated from French)

I bought these speakers there 6 months, exaspr through my hi-fi chain and my headphones (Sony MDR500) that does not allow me to mix my pieces correctly: Whenever I coutais on monitors with some friends, I went out a notebook, a pen and I noticed that there was anything touch ...

I bought these Alesis after 2 weeks of research, I hesitated between them and the Prodipe PS5 but many opinions related to me a lack of bass on Prodipe; As data I am mostly full of the big bass electro (Drum'n Bass, Jungle, DubStep) I opt for Alesis, I think 200.

It is true that paper characteristics are allchantes, and the price is good for what it is; so I put 7.

L is not the same: 6 months that I have, and already I start to tell me that shit then, if I had I would have hardly expected to put 100 more in addition srieux monitors ... Certainly, all i was crazy when installing, nothing to do with the sound of my hifi chain; but now that I got accustomed to it's true that it's a bit hard to spend hours a mixdown to realize that there still gaps on monitors or even the cha hi-fi nes which I rcoute my songs, among friends ...
For example, my last bit sounds perfectly on my Alesis, and when I listening to my chain, or that of a friend (a Sony not too dgueulasse), we only hear screaming treble (j'xagre voluntarily). And the PS8 Prodipe of a friend, it's downright dbandade the ...

Certainly I exagre a bit, but I'm picky, and they are "only" 200 pregnant ... But compared to the humming of the manual and technical paper promises, we dchante a bit ...

In 6 months, I must admit I did Interim progress of these small speakers thanks standards and to this point I do not regret my purchase.
But now that I am aware of their flaws, I ask myself: is it mandatory that pregnant 200 have gaps like the Alesis, or is it that these are REALLY M1 Active 520:
- Poor bottom mdiums
- Too high in acute
- Produce a blast, even low volume
- Not very practical rgler (volume knobs to the rear could be crants)

In short, a lot of minor complaints overall, but additionns, make me understand the very lev took some monitors. While these Alesis make good service, and it was imperative to invest the inside rather than continue with my hi-fi chain, but one day, when I have more money, I will invest in "real" monitors, it is indispensable.
Did you find this review helpful?yesno
»
Read the 13 user reviews on the Alesis M1Active 520 »