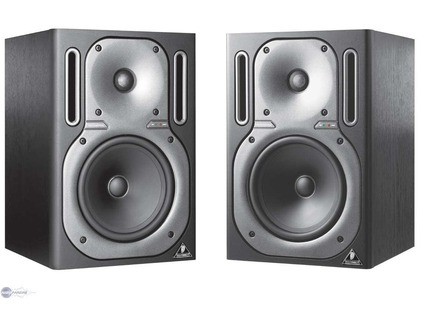 Truth B2030A, Active Monitor from Behringer in the Truth series.

Behringer Truth B2030A
4
The Behringer Truth B2030A's are a set of studio monitors designed for use in home studios. The monitors are advertised as being suitable for any sort of use in the studio, but I probably wouldn't recommend them for everything as Behringer would like you to believe. The monitors are active, so you don't need an external power amplifier, which is always a nice thing. The monitors have both 1/4" and XLR connections, which is also nice as it gives you some flexibility there. In terms of size, the B2030A's are about average, as they aren't huge but they definitely aren't the smallest studio monitors I've used. They are to be used as near field monitors, but you could probably use them as mid field if you wanted...

The sound of the Behringer Truth B2030A studio monitors is about average at best. They pick up frequencies starting at 50 Hz, so they don't have the greatest low end response, but still pack some punch down there. They have a pretty good mid and high end response as well, so in general they are pretty well rounded and do give you a good dynamic response as well. While I wouldn't say that these are perfect for mixing, you could do it if you knew them well enough and didn't have anything else to use, I'd just highly recommend checking the mixes on better sounding monitors when possible. I'd say that they are best suited for other types of uses like for monitoring and editing, but I guess you could mix with them if you wanted to...

The price of the Behringer Truth B2030A definitely makes up for all of it's short comings, but even so I'd probably recommend shopping around before making a choice. While these monitors will most likely be fine for most smaller home studio owners looking for a budget pair of monitors, I wouldn't recommend them to anyone looking to put together a legitimate studio where you could bring in clients or anything like that. These days we have a ton of different monitors out there to choose from in this price range, so while these will seem pretty enticing, I'd do yourself a favor a do your research to insure that you're getting the best possible monitors for your money.

Behringer Truth B2030A
4
I actually had these in a studio I used to work in for awhile. I didn't buy them, they were just there so I used them quite often. These are self powered monitors so they require no amp. We ran these off of a M Audio Fast Track interface with a Mac Pro running Logic 8. These were our main mixing monitors until we upgraded to some JBL's.

The stereo image was actually fairly good and was very accurate when we would test the final mixes on other gear. The dynamics were good enough for our small studio, but after we got the JBL's, we noticed a few things. One, the bass response on the Behringers wasn't very good. They also were not as flat as the JBL's and when we redid some of the last mixes we did with the behringers on the JBL's, they came out much cleaner and more balanced. There are no effects on these monitors.

What I liked about these monitors at the time was they seemed decently flat and balanced, but after using the JBL's, we realized that these were not as good as we thought they were. I think the studio paid around $400 for the pair. Personally, I don't care for behringer stuff when it comes to audio (as opposed to midi) applications so I wouldn't have paid that much. I give them a 7 out of 10 for sound quality. They worked fairly well for us for the 6 - 8 months that I used them. Yes, I have used Events, Jbl's, wharfedales, Mackies, etc... and the behringers are very low on my list. NO, I would not buy these and wouldn't recommend them to anyone.

NayaTattoo's review (This content has been automatically translated from French)

Behringer Truth B2030A
4
BI-Amplified Monitors 110w
XLR balanced inputs and Jack6.35
Corrective response in gain and frequency serious and acute.
I use them in home studio.
Very satisfied for the price.

Absolutely disagree with BPM-School!
At this price it still has a real working tools.
They sound just fine to mix, even recordings.
Like any studio monitor is a tool intended to have a listen linear (as neutral as possible) In contrast to HI-FI listening that will widen and swell with here and there some parts of spectrum and by phasing games provide a "vent" or "spacialisation" listened to the sound. A little disappointment felt then when we go on the monitor, but you know what we want to hear!
Many factors have to operate any monitoring system (resonance of the room, speaker placement, etc. ...).
In my case I initially treated my listening room and work placement (mean much here already and the difference is not begin to operate the system!). Then, after analysis, I put a 2x31 band EQ between my console and monitors.
The result:
a well defined, a very neutral response (markers on the back are not there for nothing!), although the bass is indeed a difficult to treat without a filter with box (like any speaker of this size!) they are still good and they have little, if one is not hyper require sufficiency of B2030A without cabinet.
My sound then mix very well on most systems.

I use them for 3 years. I have their big sisters B2031. When I listen to my mixes on one or the other almost no difference (except in the grave. 2031 gives a more accurate and serious size do not require housing to be precise).
I used daily had no trouble operating.
Likes: mini size, their sound for the price (between 170 and € 230 Used pair), markers on the back.
I like least is the lack of volume (a 6db attenuator general only in the back), the location of the connectors (which requires a difficult gymnastics if you disconnect and reconnect often).

price / quality ratio excellent.
At that price I much prefer other small models of other brands.

Did you find this review helpful?yesno
»
Read the 13 user reviews on the Behringer Truth B2030A »