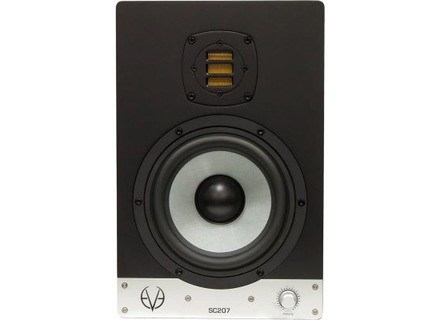 SC207, Active Monitor from Eve Audio in the SilverCone series.

All user reviews for the Eve Audio SC207

Eve Audio SC207
4
I've been using the HS50 for several years but had the need to upgrade my home studio to something more high-end.

They were on sale and there weren't any other interesting models in the store, except for the KH120. The EVE sound better than any other speakers, I think their sound is better balanced and more neutral, and the less characteristic, the more natural.

Recording, mixing, production, anything you can do in a home studio.

Sound is relatively well-balanced, at worse you can adjust it with the built-in EQ of the speakers, which allows you to adjust the basses, mids, trebles according to the acoustic environment.

Sound is clear and precise, it breathes better than with the HS50, it has more brilliance, fatness and "openness."

Good dynamic response, inevitably preciser than with my Yamahas.

I've been using the Yamaha HS50s for some time and I've heard several models at some friends' and in stores. I actually coveted the Focal SOLO6 BE but the EVE were on sale and they tempted me.

I really like the LEDs around the volume knob, it looks cool and high-tech, even if the knob in itself feels a bit like cheap plastic, which might prove annoying in the long term if you use them intensively. But, personally, once I have set the EQ according to my room, I only use the power switch to turn them on and listen, so there's no risk of it breaking or something.

I'd have to test models in the range between the HS50 and the SC207 to see if the value for money is good, in any case, from all the models I heard at the store, these ones seemed the best balanced.

For the time being, I'm happy with them, I'll have to wait and see once I start working more actively with them.

#edit: Once something sounds fine on the EVEs, it sounds fine anywhere, no ugly surprises in that regard
Did you find this review helpful?yesno
Cookies help us improve performance, enhance user experience and deliver our services. By using our services, you agree to our use of cookies. Find out more.