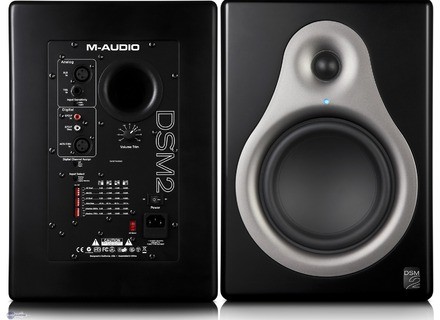 DSM2, Active Monitor from M-Audio in the DSM series.

M-Audio DSM2
4
The M-Audio Studiophile DSM2s are a pair of active studio reference monitors. It has a good amount of versatility in terms of connections, as it has both XLR and 1/4" TRS inputs as well as digital RCA SPDIF and XLR AES/EBU connections. Probably the best part about the speakers is that it has a pretty in depth tuning system that allows you to cater your sound to your room's needs. The monitors are active, so they don't require an external power amplifier. The DSM2s can be used for just about any application in the studio, including both mixing and monitoring.

The sound of the M-Audio Studiophile DSM2 is definitely better than the other monitors that I've used from M-Audio. They have a much fuller sound and cover the full frequency spectrum. They are definitely suitable for mixing in a home studio environment, although they certainly wouldn't be my first choice. As always if you're using them to mix, I'd highly recommend checking your mixes on as many systems as possible in order to insure accuracy. Even though they are suitable for mixing, if you're a professional I would stay away from them, as even though they are okay for mixing, they aren't up to a professional's standard.

Being that the M-Audio Studiophile DSM2s are up there with the best, if not the best sounding studio monitors that M-Audio has to offer. However, this isn't saying all that much as M-Audio isn't exactly known for their precision in studio monitors. My low overall rating on these monitors really has to do with the price more than anything. In this price range, I could find you a number of superior monitors, including the well liked Mackie HR824s. If you're in the market for a high quality set of studio monitors, I would browse over these and check out some of the others in this price range, as for me, many of them out there are a much better deal.