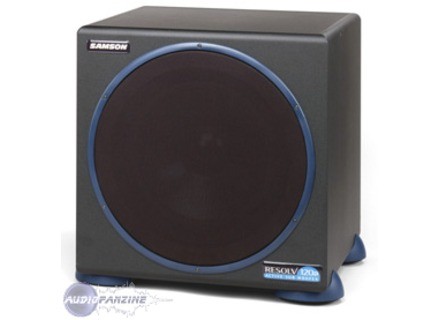 ben.no.hit's review (This content has been automatically translated from French)" Well .. well .."

Samson Technologies Resolv 120a
use in a home studio, with NS10M yamaha, replacing sub HS10W: none! (Sub affiliate)

curve: fine until 28Hz (measured), munchies to 38-44Hz (-3dB) otherwise fairly linear, dynamic se to the swing of HP (25mm), but not 28Hz without moving the air , the pleasant surprise: it's rather rare to hear these frequencies at these prices. the bottom of the grave was privileged, which is a good point, I leave the sub yamaha HS10W which cuts at 40Hz, which is right. there, I appreciate the depth and resonance of the few infra. attention: the amplification is not excessive, we quickly saw that the power supply collapses and distortion when working with large volume, but more than enough power for the nearfield, even too much the opinion of my neighbors.

3 months of use, auto ON when its presence: super convenient!
its good. pretty amazing prices. quality of switches rather blah, cutoff frequency to settle delicate, lack of graduations.
much better than the yamaha HS10W (sold) for the third of the price. Bravo samson, (though I was suspicious)

benjikimix's review (This content has been automatically translated from French)

Samson Technologies Resolv 120a
3
Ben, in fact, I bought this subwoofer in a pack with two resolv80a ... It is pretty, in the other two speakers. It's pretty big. A good cube 30cm ct. It is an active woofer, so with food intgre. It is equipped with an input / output (for connecting the two satellites) Stereo RCA, and may also receive or send a signal amplifier fate of passive speakers. He also has a switching input jack which mutes the volume with a switch. I use it in my home studio in complment other two monitors.

The curve frequency drives is it neutral? Well, not really, since a large bowl as a sound can not get out of more than 400Hz ... And again, I'm nice. It is true that in a sub-bass. Trs but frankly, I could well do without. My two monitors Resolv80a have more than enough bass, and few of Systmes COST reproduce the infra-bass subwoofer gives me that. In addition, sometimes it makes her a little. Climbing back its volume, only I reach the normal level. Trs is strange ...

I have since January, so did seven months. I am not a great usefulness trs. I should have bought one pair of monitors. Anyway, may still serve me analyze their intgralit squence audio spectrum.
The report qualitprix is ​​normal.

See all 32 photos of Samson Technologies Resolv 120a »