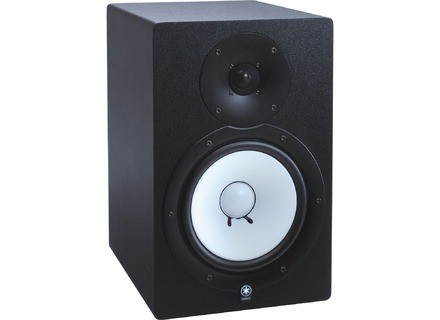 HS80M, Active Monitor from Yamaha in the HS series.

Yamaha HS80M
4
The Yamaha HS80M have been sitting on my workstation desk several times. I purchased these and then didn’t like them at first just because the sound didn’t “thump” enough for me. At first I was very disappointed in them especially after paying all that money for them. But it wasn’t untill I started reading up on mastering music that I started to understand that you don’t want your studio monitors to have a lot of heavy low end. You need a good balanced set of monitors so you can get a clean mix in.

The sound of these are good and flat. I am so happy that I understand how to mix and master music now and it makes these so much better because I was having to work to hard in my mix to over compress drums and bass to get it to thump in them. Then wonder why my mixes sounded so muddy on the low end. The Yamaha HS 80m’s havent gave me a bad experience yet. I have been getting nothing but clean masters when mixing with them. I also have a semi accoustic treated room with some foam on the walls an a few bass traps in the corner which help a lot.

Overall, these are one of the best sets of monitors that I have used and pretty sure they are the best they I have here at home. With so many different monitors on the market you need to be experimental and find the ones that will suit you the best and give you the best mix. So for these are the best ones for me, I wouldn’t choose any other ones right now. I am happy with these and will have them for as long as they hold up, not that they would go out on me anyways because they are yamaha!

Yamaha HS80M
5
The Yamaha HS80M's a set of recording studio monitors. Don't be fooled by the look, as these are no NS-10m's, and although they are modeled to look like them they don't have the same kind of sound at all. These are much more precise and full frequency encompassing. I only used these recently in a studio setting, although I had previously heard them in a Guitar Center or some other store when I was checking out monitors. They've got both 1/4" and XLR connections for hooking them up to your rig and they're powered monitors so they don't require any external power amplifier.

The sound of the Yamaha HS80M's is quite clear and crisp to me. They're great for monitoring during recording as well as for mixing but as always it's good for your main monitors to have a companion for mixing too. While I've really only used them a couple of times, I really like the way they sound as they seem to portray an accurate depiction of what is being recorded. The best way that I know to describe them would be to label them as crisp and well defined.

While I wasn’t sure what to think of the Yamaha HS80M’s at first, I’ve found that I really like the way they sound. They are a great in between studio monitor as they’ve got a professional sound but are affordable for home studio owners for sure. I still do prefer my Adam A7’s that I have at home, although those will cost you a few bucks more than these. There are a few newer sets of monitors from Yamaha in this line, so even if you can’t afford these you should check out the next step down. I was definitely pleasantly surprised by the HS80M’s as they are a great set of studio monitors!
Did you find this review helpful?yesno
»

Yamaha HS80M
5
I used the Yamaha HS80M’s for about a year and a half total, I loved them and they have a very good crystal clear sound. Great range, from hi’s to low end. But during my mixing I couldn’t get a clean mix with them. So that’s why I didn’t keep them longer than that. But for the price of these monitors its well worth the try to see how they work for you. Great neutral and accurate sounds come out of these monitors. My choice for these monitors was persuaded by the price. it’s a very respectable price for quality monitors in today’s music realm.

The curve of frequency response is excellent, the low end thumps! These monitors will do the job for you without a doubt. They have very good dynamics but a little rough on the low end which is why I couldn’t get clean mixes with them. These where my first real pair of monitors, they aren’t pretty too look at and nothing spectacular about the design but they do more than the job.

The Stereo image is ok, sound is clear and very stable . These will give you a wow factor that you will need, go to a store and try them out asap.


Overall you wont get a better monitor for the price of these, so if this is what your budget is give them a shot you might stick with them and keep them as your main monitors. They can be compared to the KRKs and Mackies. Make sure you have a solid room treatment to go with these monitors though, it will make them sound that much better! The best part about these is they are very accurate and have great precision. Knowing what I know now I am glad that I purchased these and I would do it again, maybe one day I will give them another shot!

Anonymous 's review (This content has been automatically translated from French)" The seriously."

Yamaha HS80M
5
After having seduced test Seriously.
Home studio use, creation, and now they are so mixing property.
Couples with an RME Fireface 400.
Auralex pice soundproof.

The EQ adjustments on the rear panel let diffrentes well adapted to the situations. Especially if you are obligs to place nearly a wall or corner. It is all the same prfrable optimize their investment in order to avoid any correction.

Well located it is perfect.

These speakers are really clean. Positioned on stands they correctly restaurants account for the entire sound spectrum.
The main default my taste, is the lack of gnac the bottom mdium well as below 60 Hz. But with a SECOND Contrle, ca rolls impeccable.

For stro picture, I still have not figured out how we could have had a bad seats with 2 speakers properly.

Now a few months of use.
For the price I do not know where to find better.

I also have Focal CMS, Yamaha did not blush.
Did you find this review helpful?yesno
»
Read the 77 user reviews on the Yamaha HS80M »

Yamaha HS80M manuals and other files