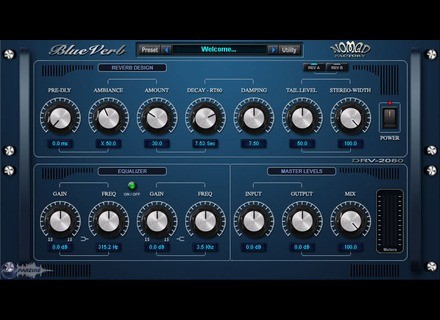 All user reviews for the Nomad Factory BlueVerb DRV-2080

Average Score:4.3( 4.3/5 based on 2 reviews )
Value For Money : Excellent
Not satisfied with those reviews?
Our members also liked:

Nomad Factory BlueVerb DRV-2080
4
Nomad Factory's BlueVerb DRV-2080 is a plug-in modeled to be a 'vintage' studio reverb effects unit. The plug-in comes as an individual and isn't part of any bundle that I'm aware of. I am not an owner of this plug-in as I've only used it at the studio where I work, where we've got most of the plug-ins that Nomad has to offer on hand. Using the plug-in takes a little bit of getting used to but is by no means difficult in my experience. All of the parameters are just a series of knobs, making it as simple to use as possible. The main reverb section gives you knobs for pre-delay, ambiance, reverb amount, decay, damping, tail level, and stereo width. These aren't the most traditional reverb parameters, but that's what I like about using it as it gives you a unique perspective on getting reverb sounds. The plug-in also has a two band EQ, each with their own gain and frequency parameters. Lastly, there's a master level section with control over mix, input, and output levels.

We've got the Nomad Factory BlueVerb DRV-2080 plug-in running on a few different studio systems where I work. All of them are Pro Tools HD based, with our main room running a Mac Pro computer with 10 GB of RAM and dual 2.66 Ghz Intel Xeon processors. I always run reverb plug-ins on aux tracks to begin with, so at most I'm running two of these plug-ins at once, which is pretty rare anyway. Given the system that I'm running it on, I haven't encountered any issues and don't expect to in the future...

The Nomad Factory BlueVerb DRV-2080 is overall a really cool reverb plug-in, but I wouldn't say so in a traditional sense. It's definitely unique as it doesn't contain many of the parameters you'll find in modern reverb plug-ins. It's a good thing otherwise I probably wouldn't use this all that often as I definitely own better reverb plug-ins at home. Even as is, I don't use it on every session but rather use it every once and a while if I'm looking for a slightly different take on reverb inside the box. I don't know if it's worth it to buy this plug-in as your main reverb, but if you're in the market for one it's a good idea to at least try out the demo.
Did you find this review helpful?yesno

johnhenry69's review (This content has been automatically translated from French)

Nomad Factory BlueVerb DRV-2080
4
A small rverb stable.
Fairly easy to turn.
3 parts
Design-reverb, the sound o it will work this rverb, fairly comprehensive and a bit more complex.
Equalizer.
-Master Levels.
GENERALLY you load a preset and then you work the sound.

PC 2.0 Ghz single core, just Lger for PC Pro Tools LE: 6 percent of the CPU.
This is less than TC qu'altiverb and M30, as far as CSR & D more than a verb.
A good little rverb his very typ mtallique well, not super versatile.
Good times, good adjuncts of rverb finer. Sub D a verb is the sound even more mtallique.
The presets are pretty Ingal them, some are just bad, others are better.
Presents the presets are found on Altiverb (Emt flat Amsterdam concert, church st Josech pluttrussi latter is on the box) but presents several Altiverb IR sites and does not at all even its far more GPs (ie the convolution at the same time), Altiverb sounds less and very little effect typ.
The blue is not a verb rverb upscale, it is not very versatile.
It remains a good effect to add to its range of his ability to work according to the desires.

In the same price range, there is the M30 from TC and CSR ik, much better but I find they do not offer the same type of sound (more clean).
To compare a D Verb she does well, it pushes the vice o sound that can label spreadsheet vintage. They will say it gets off gets off.
A good quality price ratio given the low price, it should do well against the reverb of the range 0-100.
Good even when not taking as a main reverb is okay if not hurt your mix.
Did you find this review helpful?yesno
Cookies help us improve performance, enhance user experience and deliver our services. By using our services, you agree to our use of cookies. Find out more.