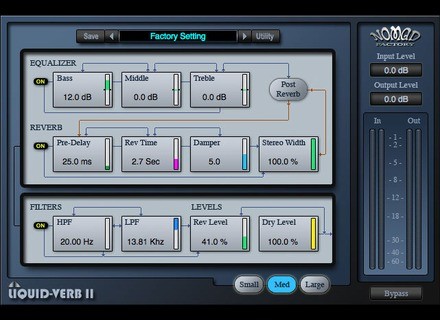 Nomad Factory Liquid Verb II
4
The Nomad Factory Liquid Verb II is a reveb plug-in that comes with Nomad’s Liquid II bundle of plug-ins. There are six plug-ins in total that come with this bundle, all at a very reasonable price. I don’t own the bundle so I wasn’t involved with installing it at all. Learning to use the plug-in for me wasn’t very hard at all, although there is a lot of control to be aware of here. The plug-in is split into three main sections – an equalizer, the reverb, and extra filters and leveling parameters. The equalizer is made up of three bands for bass, middle, and treble, with the ability to put it either pre or post reverb. The reverb itself gives you control over stereo width, damper, reverb time, and pre-delay, while the extra filters include a high and low pass. There are also overall reverb and dry level parameter in addition to input and output level parameters. Lastly, you can set the plug-in to an overall small, medium, or large reverb mode. Even though there are a decent amount of parameters here, it’s still quite easy to use and a manual shouldn’t be necessary.

The studio that I work at actually has a number of rooms on site, so we’ve got the Nomad Factory Liquid Verb II and the full Liquid II bundle running on all of these systems. The main room is Pro Tools HD based, as are the others, with a Mac Pro computer that has dual 2.66 Ghz Intel Xeon processors and 10 GB of RAM, which is more than enough to run this plug-in. Since it’s a reverb plug-in I’ll generally use it on auxiliary channel to save processing power anyway, which is something I’d always recommend doing regardless of your system…

Overall, the Nomad Factory Liquid Verb II is a nice little reverb plug-in, but it’s not the most realistic one that I’ve used before. There’s a lot that can be done with it and it certainly can add a good amount of depth to your sound. It’s nice to have the EQ controls here for the most part, but generally they’ll go unused if I’m using the plug-in as I’ll leave that to more qualified plug-ins. I wouldn’t recommend buying the Liquid II bundle just for this plug-in, but being that the bundle is $200 for six plug-ins of this caliber, it’s hard to go wrong. The Nomad Factory Liquid Verb II plug-in in the full bundle is a great way for home and professional studio owners to get some quality plug-ins on the cheap!