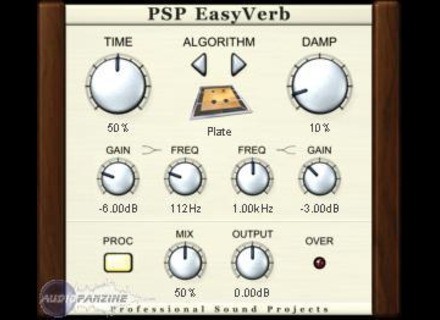 PSP Audioware Easyverb
4
There are no compatibility issues with this plugin so far.  I run a macbook with Logic 9 and Ableton 8 with a Presonus Firepod and Firebox.
Yes, the PSP manuals are all very well done and easy to read.  I had to reference the manual about the EQ shelving parameters and the PROC button.  Yes, the general configuration and setup is simple enough.  I wasn't used to seeing an EQ shelving setup but after referencing the manual, I felt more comfortable with it.  Yes, all the typical functions are right in front of you and very easily accessible.

Yes, the software works correctly.  So far, I have had no crashes or any lost presets, so yes it works very well.  The reverb itself is pretty good.  I don't find myself using this plugin much anymore as I really enjoy Logic 9's built in reverb options as well as IK multimedia CSR and  audio damages Adverb.  I have to say also I don't really use the EQ part that much.  For me, it seems a little useless.  Overall, I give it a 7 out of 10.  I have had this plugin for over a year.

Its hard to say what I like most about this plugin because nothing really stands out.  It has a decent sound but not amazing, the presets are decent too but overall, I never use this program now that I have Space Designer in Logic and many other options for reverb plugins.  What I don't like is the PROC button.  It seems useless as most daw's offer a "bypass" button.  Also, if the plugin is on a single track (as opposed to a bus) if you deselect the PROC button, it cuts off signal, instead of just bypassing.  Seems irrelevant to me.  I don't recall exactly what I paid for this plugin but I know it was less than $100.  I don't really think its worth it in my opinion.  The sound is decent and usable, but there are better options out there.   I give it a 7 out of 10.  I have used many different reverb plugins and this one rates low in comparison.  No, I would not buy this one again.  If you use a MAC, get Logic 9 and you will have some of the best reverb options on the market.