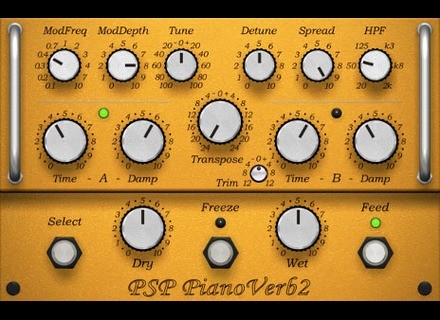 PSP Audioware PianoVerb2
5
PSP Audioware's PianoVerb is a free plug-in available in a variety of formats. The plug-in is available directly from PSP's website and is available for both Mac and PC operating systems. For PC you can download it as either a VST or Direct X plug-in, while it's available as a VST or MAS plug-in for Mac. I used to run this plug-in in Cubase SX on a Mac, but don't currently have it running on my system at home. Installing the plug-in is really easy, as all you need to do is go to PSP Audioware's website, download it, and follow the step by step instructions that show up on the screen. Learning how to use the plug-in should also be quite simple, as it has a straight forward and user friendly interface. The parameters included that you have to work with include knobs for decay time, damping, transpose, tune & detune, mix, output, and a button for bypassing. If you are unsure of what some of these parameters do, I'd suggest simply messing around with it for a bit until you get the hang of it. Not sure if there's a manual, and if there is I haven't seen one.

I'm not running this plug-in anymore, but when I was it was in Cubase SX 2.0 primarily, and later in SX 3. The computer that I ran the plug-in on was a Hewlett Packard Pavilion dv 8000, consisting of a 3.0 Ghz processor and 2 GB of RAM. I ran everything through a MOTU 896HD audio interface. I can't ever recall having a problem with performance with the PSP Audioware PianoVerb. It's definitely designed to be a low processing power needing plug-in, as it's free and the idea is that it will be able to run on most, if not all systems. If you're having any questions, just try it for yourself.

I'd definitely encourage anyone with a compatible to go ahead and download the PSP Audioware PianoVerb. It's free and you won't find too many free things out there these days! The best part is that this plug-in actually sounds pretty cool! It's not groundbreaking by any stretch and isn't by far the best sounding software reverb out there, but considering it's free it's pretty nice. There's really no reason for you not to be downloading it and trying it for yourself right now...

Published on 10/25/15
Until October 27, PSP offers special discounts on its Echo and Pianoverb 2 plugins.