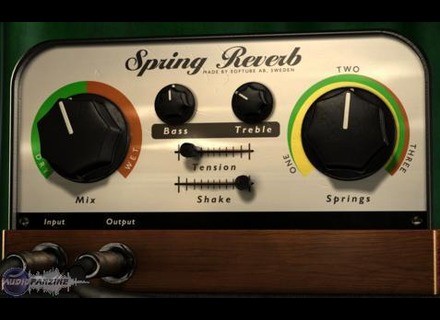 Softube Spring Reverb
5
The process of installing the Softube Spring Reverb plug-in wasn't hard as it only took a few minutes.  It was the same process as most other plug-ins out there as it was straight ahead with nothing out of the ordinary.  The interface of the plug-in didn't take me too long to get used to as everything is nicely laid out.  In the interface you've got parameters for mix, number of springs (one, two, or three) and bass and treble in the form of knobs as well as sliders for tension and shake.  This is awesome because it has parameters strictly in terms of a spring reverb and caters itself to this, so you can really get some versatile sounding spring reverb tones.  I haven't seen the manual for the Softube Spring Reverb plug-in, so I can't say how well together it is or not.

Thus far I haven't ever had any problems with running the Softube Spring Reverb plug-in on my system.  I am currently running an RTAS version of the plug-in on a Mac Book Pro that has a 2.2 Ghz Intel Core 2 Duo processor and 4 GB of RAM and I run the plug-in in Pro Tools LE 7.4 that runs with a Digi 002R audio interface or a Digidesign Micro Box, depending on where I am.  I've never had a problem running the plug-in within this configuration although I do tend to use an auxiliary channel with any type of reverb to save processing power.  However, I have been able to run a few of these on a few different aux channels without any issues.  I think that as long as you have an adequate system to run Pro Tools on, that you shouldn't have any trouble running Softube Spring Reverb.

I've been using the Softube Spring Reverb for about six months and I'd definitely a fan of the way this plug-in sounds.  There aren't too many plug-ins out there that are solely devoted to a spring reverb, and this one does a great emulation of one.  It is easy to use and definitely provides enough parameters to make it quite versatile in terms of the different sounds that you can get.  The price of the plug-in is quite cheap when compared to other plug-ins of the same nature.  This is a great reverb plug-in for both home studio owners and professionals alike.

Published on 06/09/15
Softube is offering a 40% discount of a selection of plug-ins and Rack Extensions.