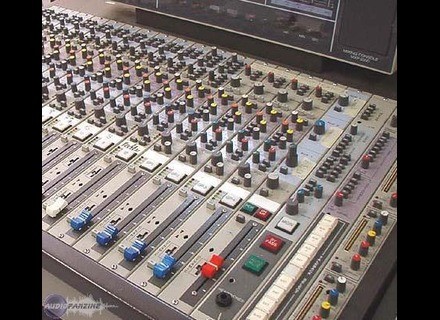 Moimayme's review (This content has been automatically translated from French)" New reviews 5 years of use, it is simply Sublime"

MCI MXP2000
5
Unlike some previous opinions is rack in individual housing ...
The eq is quite similar to the Midas XL3 with the HM and LM Parametric.

Setup is simple for a pro. and complicated for Tech Sunday ...: o)

The console gives an impressive musicality, all become fluid and limpid, the music flows like a stream, it gives a professional texture all that is going on inside.
The Eq is surgical type and recalls the Midas XL3.
Almost not breathing, pre-amps are awesome, it is very easy to change the OP to upgraded for a few Euro per slice.

I have 5 years, I already knew the Midas and Soundcraft
The price is more attractive because at the time of its release the craft sold more than $ 60,000 at the time, and MCI / SONY was the Apotheosis of their Art and worked closely both the USA to Japan .
NB THE TYPE DOWN THAT SAYS NOTHING CONSOLE NA MCI KNOWS NOTHING AND COME TO NOTICE corrupt FORUM! Just read it to see her, it's too unfair.

There 5 years I asked the intelligence whether MXP2000 was nice MCI / SONY and the answer was to give me the intervening Audiofanzine had been published here under the name SachaGuitryAuteur, and yes it is well a MCI. O)

pan_work's review (This content has been automatically translated from French)

MCI MXP2000
3
Diffrent config
tract stereos, voices mono
This is not an MCI but SONY
the myth tends to believe that this console is small dernire MCI
what is wrong, the analysis clearly shows that the circuit technology and know-how sony is in this toy prpondrant

We are beginners in the years CUNE rgy broadcast console, ideal for radio
Labor more than one routing in most broadcast and compressors assignable or onveut

Several things:
- Very good signal to noise ratio this console is really enjoyable so silent c trs
- The preamps / eq are against trs way to broadcast, the lack of prsence
- Bus rapid twists summation
The Eq sound a little harsh but everything still pretty confused c
This is far smaller Neves good old 542 or 169/961 studeri The models that are competitors but older ...
Say, if you can not get better, it will always be better than a poor mackie ...
ca is medium range

I made this album default to have something else, I'm not a fan trs and allow me to say because I see that many brokers spculent bcp on branding and Notore MCI t
Be aware that it is primarily a SONY and on Ebay they leave the United States in gnralement 6 mono 6 stereo model in the $ 1000
Now it is very far from the beautiful 70's consoles in discrete, this console is not really a c trs musical console rgy very beautiful, very quiet but a bit aggressive eq, compressors parlont do not, real walls, difficult to use properly to the music (can be fun for the hard techno!). Well that said, c not that bad either .........

djef2000's review (This content has been automatically translated from French)

MCI MXP2000
2
A post because I too hsit before buying a small mixer front end to finalize my mix and for APRS protools bnficier a fleet of mic preamps without having to buy a dozen rack (it's super cheap for such quality 15000th dcente).
With an average budget I started buying a 2000 MXP, I had trs expensive because more 3000euros. C'tait June 1 + 6 stereo channels mic line.

The console of the 80, the routing is good, the signal will walk across it enjoyable. It's really philosophy rgy radio.

The console is not at all clear, but it introduces hlas color is absolutely no music. Impression of hardness of the nasal, the color must take the 1000/2000Hz which breaks the ears, and at the bottom and the top is compltement inprcis ...

I had a pack of breath on the modules and the master, maybe she needed a little rvison or reccapage.

The rant, I find this music console unusable because it is not effective to mix and record it ten times worse because pramplis are really ugly (I see no other way) I pr eng far the Mackie CR, but without really hsiter!

- For the mix, even if the line remains premampli transpartent the equ are simply unusable. There are far too powerful, but especially not to mix and music. HI SHELF is despicable, dingy, I see no other word. Down is unclear, inprcis, round but cold ... it's hard dcrire ... everything I've tried to do with the mixing console adplu, everyone was there was qqchose was wrong, the rponse: the EQ dfigurent stamps, d triorent harmonics. In short, what is the mixer so if you can not use the eq?

- To talk about the worst thing is the microphone preamps. Ideal antenna for a speaker, but you must be deaf to music. On an acoustic guitar or voice, c the cata ... Neumann sound in the set is like caviar given to .... (C DSOL not pretty) ... color, texture, prsence, does not work.

In the end, I sold it cheap, I lost some money. Gard 3 months.
APRS I started in the nine since I bought the Trident S100. Big dception ... Still lost! Bang! Then m'tre APRS information around the world, I was advised several options such as buying a summer or AUDIENT API (same mic preamps no, no eq and it cost d j 2000 euros) for shuffled my signals ... I chose the API ... Yes, I would not say no one Neve Studer 542 or 169 or 961 small, good brands that prove themselves!

Yann Coppier's review (This content has been automatically translated from French)

MCI MXP2000
5
Very heavy but not ultra-complete rack-level connections and possibilities. Plugs in the rear allow almost any configuration. Mine has 8 preamp / line and 4 stereo line, for a total of 16 channels. 4 + 4 compressors limiters, EQ basic but formidable, with 3 (shipments and returns) all pre / post fader with a stereo EQ available on each turn, four sub-groups with VCA, EQ and compression as well. 48V phantom power, phase reverse, low cut and Sun for every. A direct out for each output point also with microwave, line, or channel EQ. Solo and PFL circuits separate monitor section booked solid, integrated talkback opportunities shipments on SEND or 5 headphones separate oscillator section to calibrate all parts of the console, etc ...

It is complete, not necessarily simple need for a patch with input / output / insert / direct out at least, requiring less technical expertise to buy ready-made, powerful routing section, monitoring impeccable, VCA on groups, etc ... until an indicator of phase correlation! All the usual functions of a large present, apart from the fact that it is not inline, all with 4 compressors and more. The manual is complete and essential in my opinion, since it has all the construction drawings and wiring.

No breath after 20 years of service and not a squeaky knob, only a very slight hum when you push it completely to the bottom. For sound, non transparent, accurate round but yes, no problem! Taken on its battery, for example, is truly deadly, highly effective EQ and insert compressors are a treat. You have to be deaf not to realize it, or never having to take his ... The principle is clear: the potential equalization and compression are reduced but highly musical. The 3-band EQ has a + low cut at 80Hz, and hard (by the way, there's no high shelf, cf. Criticism "subtle" below ...). The bass in particular are superb! Ditto for the compressor + limiter, which have a very fast attack (1 to 5 ms max) and gain an automatic compression post.

I have recently. It is complete with most features of a great and sound perfect not only for its price, but excellent simply for the taking. After his release, the console was worth a fortune and it shows. Impeccable build quality, 2 to 3 times cheaper than a Neve 12 channel, with 2 to 3 times more features and a real sound. We can push the preamp to block before they twist so audible, it's a real pleasure. As for the idiot who compares it with a Mackie ...

Did you find this review helpful?yesno
»
Read the 5 user reviews on the MCI MXP2000 »